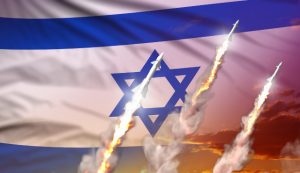 “A heavy barrage of close to 20 rockets were fired from Lebanon into northern Israel on Friday, activating the Iron Dome and setting off sirens throughout the area,” The Jerusalem Post said in their report.

The Hezbollah organization was first dubbed a terrorist group back in 1997 by the United States State Department.

“Important to remember: Nothing happens in southern Lebanon without Hezbollah’s approval and Hezbollah doesn’t do anything without Iran’s approval. Southern Lebanon is, for all intents and purposes, controlled by Iran and rocket fire from there is an Iranian message to Israel,” Avi Mayer, who serves as the managing director of public affairs for AJC Global, went on to remind folks.

Nothing happens in southern Lebanon without Hezbollah's approval and Hezbollah doesn't do anything without Iran's approval.

Southern Lebanon is, for all intents and purposes, controlled by Iran and rocket fire from there is an Iranian message to Israel.

Despicable Hezbollah terrorists in Lebanon 🇱🇧 have fired a barrage of rockets at the people of Israel 🇮🇱. Video shows iron dome in action as innocent civilians run for cover. h/t @AuroraIntel pic.twitter.com/qQutvP2vBv

The Israel Defense Forces (IDF) released a statement: “More than ten rockets were fired from Lebanese territory into Israeli territory. Most of these were intercepted by Air Force soldiers, and the rest fell in open areas in the Har Dov region. Those Israelis in towns near the Lebanon border may continue with their routines as usual. The IDF is attacking the source of the launches in Lebanon.”

“In a statement sent via WhatsApp, a media coordinator for Hezbollah said: ‘At 11:15 am on Friday, and in response to the Israeli air raids on open ground [in southern Lebanon] early Thursday, [two groups] in the Islamic resistance bombarded open land in the perimeter of the Israeli occupation’s positions in Shebaa Farms with tens of 122 mlm grade rockets,’” The Washington Post stated in their piece on the unfolding events in the Middle East.

Hezbollah’s dominance over Lebanon was challenged this week on the one-year anniversary of the blast at Beirut’s port in August 2020 in which at least 214 people were killed, “one of the largest non-nuclear blasts in history,” France 24 said in their report.

“Thousands of people, many holding pictures of the dead and waving Lebanese flags, gathered near the port, a few hundred metres from an official memorial service where attendees sat in rows of plastic chairs cradling pictures of their slain relatives, as Lebanon’s Maronite patriarch conducted a mass that began shortly after 6:08pm, the time last year when the blast occurred. A huge banner on a building overlooking the port said: “Hostages of a Murderous State,” the report continued.

Just before the huge rocket attack on Friday, three rockers were launched from Lebanon toward Israel which prompted a response from the Israeli Defense Force on Wednesday.

“It is the world’s most heavily armed non-state actor, with a large stockpile of unguided artillery rockets, as well as ballistic, anti-air, antitank, and antiship missiles. Hezbollah held around 15,000 projectiles on the eve of the 2006 Lebanon War, firing nearly 4,000 at Israel over the 34-day conflict. The party has since greatly expanded its arsenal, today estimated at 130,000 rockets and missiles,” Missile Threat said of Hezbollah.