Rep. Van Duyne Rips Into Democrats Over ‘Anti-Semitic Rhetoric’ And The Problems Its Causing 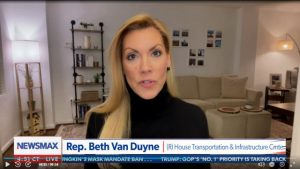 Rep. Beth Van Duyne, a Texas Republican, ripped into Democrats during an appearance on Newsmax Monday over “anti-Israel,” “anti-Jewish,” and “antisemitic” rhetoric coming from the Democratic Party stating that it was causing a lot of problems.”

The comments were made during the Texas congresswoman’s interview on “The Chris Salcedo Show” come after an 11-hour hostage situation happened within Van Duyne’s district, located in Colleyville, Texas, on Saturday, according to a piece published by The New York Times.

Van Duyne criticized the hesitancy of the Federal Bureau of Investigation (FBI) to label the hostage situation as domestic terrorism.

“Finally, the FBI has identified this as domestic terrorism,” the congresswoman remarked. “I’m looking at U.S. Code 23-31 that defines domestic terrorism as activities that involve acts dangerous to human life that are violations of criminal laws of the United States or any state that appear to be intended to affect the conduct of a government by mass destruction, assassination, or kidnapping.”

“That’s exactly what this was, and we knew about that moment into the kidnapping,” she said.