Rep. Tom Emmer Says Blame For Crises Unfolding Now Is ‘On The Democrats’ 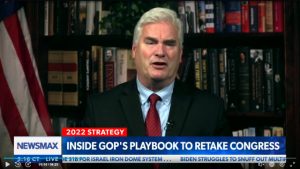 According to Rep. Tom Emmer, a Republican from Minnesota, increasing the debt limit, avoiding a government shutdown, and failing to get a $1.2 trillion infrastructure plan and a $3.5 trillion budget is probably going to be blamed on the GOP, but in reality, it’s all the Democrats doing.

“This is on the Democrats; this is their problem; they’ve created it,” Emmer went on to say during an interview Thursday on “Spicer & Co.” “They’re going to have to figure out how to solve it.”

Emmer told co-hosts Sean Spicer and Lyndsay Keith that Democrats cannot find ways to work with Republicans on passing legislation, because they are fighting within their own party first and foremost.

“There’s no such thing as a moderate left, and this idea that there are centrist Democrats, they’re not,” the congressman said. “This is a fight on the left between the far left and the left. It’s a fight between socialists and liberals.”

Emmer hopes American voters can see through the Democrats’ attempts to blame Republicans for their struggles on everything a Republican majority in the House and Senate could solve.

“Republicans know how to control this inflation issue,” Emmer continued. “Let’s get back to building bigger paychecks and keeping prices reasonable for American families across this country. Let’s restore safety and security in our communities and across this country, Sean.

“That will be the Republicans’ basic agenda. The details will be rolled out at the beginning of next year, and we’re gonna be running hard and holding the socialist Democrats accountable for their outrageous spending, raising taxes, not taking care of our safety and security here at home and abroad,” Emmer said.

It’s kind of like how Biden is the sole cause of the mess at the border, but is now pretending like nothing is happening down there, despite the fact thousands of people are now camped out beneath a bridge in Del Rio, Texas.