Rep. Tenney Tears Biden A New One; Says Blame For Afghanistan Failure Lies With Him 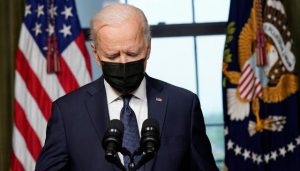 The key members of the Biden administration, such as Joint Chiefs of Staff Chairman Gen. Mark Milley and Secretary of Defense Lloyd Austin are the ones who are receiving the lion’s share of the blame for the debacle in Afghanistan, but according to Rep. Claudia Tenney, the “botched policy” came straight from President Joe Biden himself.

“This is like a Keystone Cops episode,” the New York Republican went on to say during a conversation with the hosts of Newsmax’s “Wake Up America.” “Unfortunately, the tragedy is happening on the world stage in a tragic part of the world where we have a botched policy coming directly from Joe Biden. I don’t believe that Gen. Milley and Secretary of Defense Austin are giving the instructions and Joe Biden doesn’t know what’s going on.”

The current president, Tenney went on to explain, is a “jaded political hack who has been making terrible policy decisions his entire political career, and this is just more of the same.”

The president turns away from the media without answering questions “because he doesn’t care,” and now Milley, Secretary of State Antony Blinken, and the others are “left to be the puppeteers to spin this, and to make it look like Joe Biden isn’t at fault.”

If Gen. Mark Milley is not in complete agreement with President Biden, “he should resign,” said the congresswoman. “If you don’t agree with the commander-in-chief, you resign instead of just shilling for this guy. They need to do the right thing and they need to stand up and be counted.”

Meanwhile, as the Taliban takes control of Afghanistan and it is somewhat collapsing, “this whole disaster has resulted in tragedy and “Joe Biden is on the beach somewhere” relaxing and “probably getting himself ready so he could do yet … another 10-minute speech where he refuses to take questions.”

Further, Tenney went on to explain, Biden is being “completely non-transparent and shows no empathy” to the 10 civilians that were killed in a U.S.-ordered airstrike.

She also criticized the Biden administration for “censoring drone footage” of the situation at the Del Rio, Texas, bridge where thousands of refugees, mainly Haitians, are crowded waiting for entry into the United States.

“Why are they just walking away and turning away from a humanitarian crisis that is putting, not only these people at risk, but Americans at risk?” she added. “They’re doing nothing but reversing all the policies that President [Donald] Trump put in place that were protecting these people and protecting American citizens. That is the primary role of our federal government is to protect our security and they’re not doing that. It’s just amazing that they just walk away. People should be outraged and concerned about this censorship.”