Rep. Steube Says US Shouldn’t Have Raised Debt Ceiling With Spending Spiraling Out Of Control 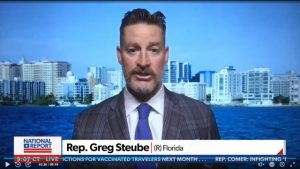 Rep. Greg Steube recently made an appearance on Newsmax where he said that while our country’s spending is raging out of control, the debt limit should not have been raised, especially while Democrats are doing their darnedest to get a massive “socialist welfare program” passed into law that will tack another $5.5 trillion to the problem.

“This is my second term,” the Republican congressman stated Wednesday on ”National Report.” “When I got elected, the deficit was $21 trillion. It’s almost $30 trillion as we sit here today. Just in the last 18 months, our Congress has spent $11 trillion, and just to put that into perspective, we only take in $3.5 trillion a year.”

The House on Tuesday night approved legislation that will allow the current national debt limit to rise to about $28.8 trillion, or by $480 billion. The current national debt is at $28.4 trillion. President Joe Biden is expected to sign the bill, particularly after Treasury Secretary Janet Yellen’s warnings of severe economic problems by Oct. 18.

“Washington has a spending problem,” Steube went on to state. “Why in the world will we raise the debt ceiling to pay for a socialist welfare program? We should be reining in the spending and cutting spending in Washington, not increasing it.”

Steube also criticized House Speaker Nancy Pelosi D-Calif., after her comments to the media that she thinks they could do a “better job of selling” the $3.5 trillion spending bill to the public.

Steube also said during the interview that he doesn’t know what difference it makes to push the debt ceiling to December, “as Democrats have been talking about the infrastructure plan since February, and the measure is still being blocked by progressives who won’t vote for it unless it includes the $3.5 trillion spending bill,” the report added.