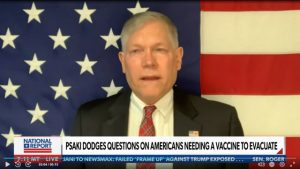 Rep. Pete Sessions, a Texas Republican, recently spoke with Newsmax Wednesday saying that the White House’s “political policy is simply wisdom that fails to meet the test of common sense.”

During a discussion about the situation in Ukraine on Newsmax’s “National Report,” the Texas congressman went on to say, “We watched President Joe Biden essentially play Jimmy Carter for the weeks leading up to now, and you just cannot do anything less when dealing with the Russians.”

The reputation that Carter has for being a weak president when it comes to foreign policy stems from the result of the infamous 1979 Iranian hostage crisis, which Islamic students managed to overrun the U.S. Embassy located in Tehran and take 66 Americans hostage, holding them for a total of 444 days.

Former President Donald Trump said in May of last year that Biden can’t be compared to Carter.

Americans fleeing Ukraine through Poland have reportedly been told to show proof of COVID-19 vaccination at the border.

At a White House press briefing, press secretary Jen Psaki dodged a question from a reporter about vaccination status for Americans entering Poland from Ukraine, referring them to the State Department.

Sessions said that he is unsure if Americans in Ukraine had access to COVID-19 vaccines, but that it shouldn’t make a difference at this point.

“We need to get people out of a war zone,” the congressman said during the interview. “It is in America’s best interest not to have our citizens be in the midst of a war zone where it’s very dangerous.”

“To simply put up a red herring that you’ve got to show your vaccination card is not very nice and this State Department should insist that we get those people out and take care of them,” he continued.

Sessions also stated during the conversation that the Biden administration needs to exercise caution in how it handles the Ukraine crisis because Beijing is keeping a close eye.

“This is where their political policy is simply wisdom that fails to meet the test of common sense,” he went on to say. “And I will tell you that this White House is badly, badly behind the curve. They were back in Afghanistan, they are again today.”

“Recently leaked notes from a White House Situation Room meeting the day before Kabul fell reveal how unprepared the White House was for an evacuation, Axios reported,” Newsmax said.

“As a result, House Committee on Oversight and Reform Ranking Member James Comer, R-Ky., and Subcommittee on National Security Ranking Member Glenn Grothman, R-Wis., requested in a letter Tuesday that the Biden administration officials provide all documents and communications related to the withdrawal from Afghanistan,” the report continued.