Rep. Ronny Jackson: Americans Have Been Left In Afghanistan To Fend For Themselves 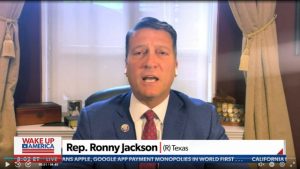 Rep. Ronny Jackson said on Tuesday that it’s “ridiculous” to think that Americans who have been abandoned in Afghanistan, with the Taliban controlling the country, will somehow be able to get away from the terrorist group with the U.S. military gone when they couldn’t escape from them when our troops were there.

“Their only option at this point is to take these dangerous, treacherous treks, [of] six, eight, 10 hours across the country, to try to get across the border to another country, and they have to cross through multiple Taliban checkpoints on the way,” the Texas Republican stated during a discussion he had on Newsmax’s “Wake Up America.” “These are American citizens and we have left them to fend for themselves in the middle of the most heinous terrorist group on the planet.”

Pentagon press secretary John Kirby said Tuesday on MSNBC that there are still “low hundreds” of Americans in Afghanistan, and said that there will not be a “whole of government effort” rather than the military playing a role in getting them out.

“If they get captured by ISIS, you know what’s going to happen,” Jackson told Newsmax. “It’s going to be horrible. We’re going to see the images that we saw in the Obama administration with the orange jumpsuits again, and people being decapitated on camera. That’s the kind of stuff that’s out there.”

Jackson then added that it “makes my blood boil” that American citizens have been left behind, and that such a thing happening is both “shameful” and “embarrassing.”

The congressman then revealed there are 77 people from his district who are stuck in Afghanistan.

“I have a woman and three children who have been trying for over a week to get out,” Jackson told the hosts of the show. “She’s followed every single direction the State Department gave her. She’s been to the gate multiple times. She was 200 feet from the gate the other day, and they wouldn’t let her in. She went back, and she hit a Taliban checkpoint, and they struck her 15-year-old son in the head. They beat her uncle up, and they put a gun to her head and told her they didn’t care who she was or what her passport was, said if she came back to the checkpoint, they were going to kill her.”

He then revealed the State Department has taken no action to help the woman.