Rep. Reschenthaler Dismisses Jan. 6 Probe As Nothing But ‘Political Theater’ 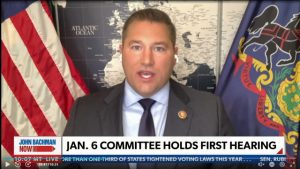 According to Rep. Guy Reschenthaler, the House Select Committee and their investigation into the Jan. 6 riots that took place at the Capitol building are nothing more than “political theater,” and are not an attempt by Democrats to truly get to the truth of what happened.

“The Republicans that leader (Kevin) Mccarthy selected to be on the commission would have asked those tough probative questions, but let’s get something straight; this is not about getting to the truth,” the Pennsylvania Republican went on to say during an interview on Newsmax’s “John Bachman Now.”

Instead, Reschenthaler said, the hearings and committee are “not a real investigation,” but a way for House Speaker Nancy Pelosi to “control the narrative” rather than addressing “what’s going on in the streets right now, rising crime rates, inflation that’s hitting the working class incredibly hard, chaos on the southern border, and aggressive adversaries abroad.”

But as long as Pelosi and the mainstream media are talking about Jan. 6, “they’re not talking about the disastrous policies and the acts, the absolute chaos that’s going on at the White House,” he maintained. “That’s what this is really about.”

He also disagreed that the committee, which has just two Republicans, Reps. Liz Cheney and Adam Kinzinger, can be described as being bipartisan or nonpartisan.

“One thing I’ve learned in Washington, D.C., is when you hear something being called nonpartisan or bipartisan, it means there’s a bunch of Democrats and Republican-hating Republicans that comprise whatever committee it is,” Reschenthaler stated. “The public does not care and their support for this commission is waning and dropping. It’s because every time they go to a gas station, they’re paying more money. Every time they go to the grocery store, they’re paying more money because of inflation. They’re worried about getting mugged in the streets. These are legitimate concerns of everyday Americans. They want to look forward.”

Reschenthaler then noted how Pelosi is refusing to seat “anyone that counters her narrative” on the committee.

“It shows that this is a sham investigation,” he continued. “This is hyperpartisan, and it’s what Nancy Pelosi ultimately wants. She wants one-party rule, not just in this committee, but in Congress and in the entire nation … they’re drunk on the idea of one-party rule in total political dominance, and you see that as a microcosm in this commission that she set up and then had the gall of calling it bipartisan.”

It is definitely strange that Pelosi keeps shutting down the appointments of GOP members who might dare to push back on her narrative of events from Jan. 6. We should all be concerned with knowing the truth, not pushing an agenda.