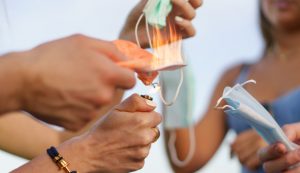 End of coronavirus and back to normal life concept: young people burning the protective masks to celebrate the end of the COVID-19 pandemic.

According to Rep. Ralph Norman, if Democratic leadership attempts to reinstate mask mandates out of fear of the spread of the Delta variant, American citizens will “revolt.” Norman was slapped with a $500 fine after he refused to put a mask on while on the House floor.

Norman’s comments came after Dr. Anthony Fauci told CNN Sunday that the Centers for Disease Control and Prevention are weighing revising COVID-19 guidelines and recommending that everyone, even fully vaccinated people, wear masks when in public.

Norman said he wants to know, instead, why the administration hasn’t established a commission to determine the origins of the virus.

“It stuns me that no one is more curious about finding out where this actually came from so we can make sure it doesn’t happen again,” he went on to say.

“You know, we’ve got freedom in this country to choose whether we get vaccinated or not,” Norman added. “I got vaccinated. But the same thing on the mask. Most of the doctors I talked with say masks do no good. This is another scare tactic that I think this administration is using.”

Norman then said that it’s “hypocritical” that folks can just walk across the southern border who have not had a vaccine and that immigrants are being shipped “all over this country.”

He then said that if the current administration was serious about pushing for a vaccine mandate, “they would use that as a real reason to mandate vaccines for these people, but they’re not doing it,” the congressman said.