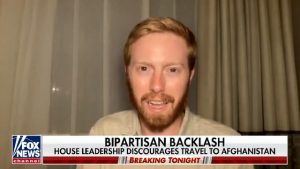 Rep. Peter Meijer, who was one of two congressmen who flew to Afghanistan this week, stated that it’s time for Congress to “reclaim its authority over war powers” in order to prevent another attack like the one that happened in Kabul.

The Michigan Republican tweeted some remarks after news of the attack, which killed 13 U.S. service members and dozens of Afghans were killed by a suicide bomber at the airport.

“Congress needs to reclaim its authority over war powers to ensure such a catastrophe never happens again. Tonight, I grieve with the families. Tomorrow, we work to do everything we can to ensure no other family suffers a tragedy like this,” Meijer posted on Twitter late Thursday night.

“My heart is absolutely broken after today’s horrific attack against Marines at Kabul Airport’s Abbey Gate. I struggle to put together the right words knowing the pain that 13 families, and their fellow Marines, are going through tonight. No talk can ease that suffering,” Meijer stated in one of his tweets.

“On Tuesday I saw Marines bravely managing chaos at Abbey Gate. Today, the grave risk they took to save countless lives was made terribly clear. This was a position they should not have been in, but President Biden’s reckless withdrawal gave them no other choice,” he also tweeted.

Meijer and Moulton were criticized by fellow lawmakers and Biden administration officials after their surprise visit to Afghanistan, where they were on the ground at the Kabul airport for several hours before flying out on a military plane.

“This is deadly serious. We do not want members to go,” Pelosi went on to say Wednesday. “It was not, in my view, a good idea.”

Meijer told Fox News that the criticism from the Biden administration was “frankly laughable.”

“Right now, the have done everything they can to obstruct the situation, to deny this reality, and then frankly to hide facts from the American people,” Meijer told Fox News during a conversation on Wednesday night.

“I’ll be honest, I did not support the decision to end our operations on Aug. 31 before I went. After talking to commanders on the ground, I trusted their judgment. and believed I it,” he concluded.

This would probably be a very good idea. Especially since President Biden seems to either be completely incompetent or cognitively compromised and unable to make such critical decisions as those involving national security.