Rep. Perry Says Milley, Austin, And McKenzie Should Have Called It Quits Over Orders 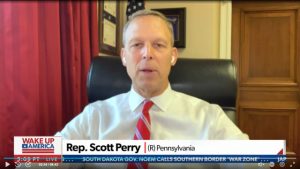 Rep. Scott Perry believes that if the three Pentagon leaders who are set to testify in front of Congress this week knew that President Joe Biden’s orders to yank troops out of Afghanistan were not appropriate, they should have stepped down from their positions.

“When I was watching the hearing as a person who was honored to serve for over 30 years in uniform, it looked like the Three Stooges to me,” the Pennsylvania Republican, who is a retired Pennsylvania Army National Guard brigadier general, stated during a conversation on Newsmax’s “Wake Up America.” “I will tell you what I did when they issued orders to me that I didn’t feel were appropriate and would not and could not carry out, I left the military. That’s the appropriate thing to do.”

Perry did not provide additional details concerning what those orders were.

Gen. Mark Milley, the chairman of the Joint Chiefs of Staff, Defense Secretary Lloyd Austin, and Gen. Kenneth McKenzie, the commander of U.S. Central Command, will return to Congress Wednesday to testify before the House Armed Services Committee.

In their testimony before the Senate Armed Services Committee, the three testified that they had all advised Biden to leave a residual force of troops in Afghanistan. Biden, however, has said that he does not recall receiving such advice.

If Milley, Austin, and McKenzie knew that Biden’s orders would imperil troops, the country, and the mission in Afghanistan, it was “their duty to do something about it it,” said Perry.

“It might seem like it’s histrionic, it’s dramatic,” he went on to say. “Well, we lost soldiers for no reason; we’ve killed Afghan civilians for no plausible reason. This is the fallout from not having the moral integrity and fortitude that is required of military officers. This is what you get.”

Biden’s comment that he doesn’t recall, according to Perry, is the “operative phase.”

“He might actually believe himself or someone is lying,” the congressman explained. “Either the president’s lying or the top three military leaders in the country are lying. Why people lie is to avoid accountability, and that’s what’s occurring right now. They’re trying to manage the damage.”

“I think America is very clearly seeing the rot that is occurring at the top of this fish, at the head of this fish,” Perry stated. “It starts with President Biden right down through the top of the chain of command. These people absolutely all have to go one way or the other, whether they resign or they are impeached.”

Many lawmakers have now called for an investigation to be done on Milley, Perry commented.

“He deserves his day in court but there needs to be an investigation to determine what happened here so that accountability for these losses can be provided,” he said.