Rep. Pat Fallon: The United States Should Not Be Funding The Taliban 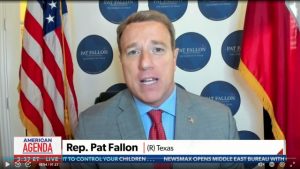 Rep. Pat Fallon, a Republican from the Lone Star State, slammed the Biden administration for sending aid to Afghanistan, stated that the assistance our country is providing would end up in the hands of the Taliban, which he went on to describe as being a group of “murderous bullies.’

“We shouldn’t” give funding to Afghanistan, the congressman stated on Tuesday’s edition of “American Agenda.”

“We should cut them off completely,” he went on to say. “My fear would be any funding that we gave them, whether it’s in actual hard money or if it’s in goods, would… just empower this [Taliban] regime because we’ve seen this the world over with Somalia [and] North Korea. Lot of the times, food and medical supplies are power. And the Taliban will probably just hoard it to solidify their position.”

Fallon’s comments come in light of White House press secretary Jen Psaki’s announcement that $64 million in aid would be sent to Afghanistan.

But according to Fallon, Psaki’s comments are incredibly naive. ”To think that we’re going to be able to help the Afghan people? And the conduit and facilitator is going to be the Taliban? That would be laughable if it wasn’t so dang sad,” he said.

According to a new report published by The Hill, the $64 million is part of the $600 million in aid that was put together by the United Nations in order to try and stop a famine from happening in Afghanistan.

Fallon went on to say that some of his sources have indicated that the Chinese have already started to gather at Bagram Air Base.

What an absolute disaster.