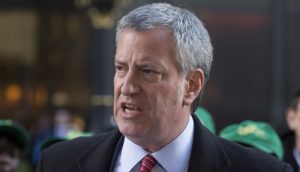 Rep. Michael Grimm was none too happy about New York City Mayor Bill de Blasio’s new vaccine mandate for private sector employers, stating it is “horrific” and is likely to cripple small businesses if it is implemented.

“When you just look at the business community, they were decimated by COVID, and those that barely hung on, this could be the nail put in the coffin for them because they must have this robust season. Christmas is the time that the hospitality season, including restaurants, really make their money,” Grimm said.

“If you’re going to start mandating 5, 6, 7-year-olds have their shot, a lot of parents don’t feel comfortable doing it. … This cripples our small businesses, and the Big Apple is already hurting from eight years of de Blasio’s poor policies,” he continued.

The mayor stated during the announcement about the mandate that businesses would have three weeks to ensure all of their employees get vaccinated.

“We in New York City have decided to use a preemptive strike to really do something bold to stop a further growth of COVID and the dangers it’s causing to all of us,” de Blasio stated during an interview on MSNBC.

De Blasio also urged mayors, governors, and CEOs “all over the country” to use the vaccine mandates.

“The more universal they are, the more likely employees will say, ‘OK, it’s time, I’m going to do this,’ because you can’t jump from one industry to another or one company to another. It’s something that needs to be universal to protect all of us,” he remarked.

The new policy is set to go into effect on Dec. 27. Merry Christmas, New York City.

There were quite a few elected officials who weren’t happy about the mandate.

“Mayor de Blasio can’t leave fast enough. He has crushed small business, the economy and quality of life. How many more New Yorkers does he want to see move to the free state of Florida?” Rep. Nicole Malliotakis, R-N.Y. said about the mayor.

“I’m hopeful the incoming mayor will roll back these arbitrary mandates,” Long Island Rep. Lee Zeldin, R-N.Y., who is running for governor, went on to say.

“When you dangerously combine a far-left, lame-duck politician, who is anti-business, one-dimensional, unaccountable, not bright and has a perpetual ‘I always know best’ attitude, you get Bill de Blasio, the worst mayor in America,” he continued. “There is no way this job-killing, small business-suppressing mandate is legal!”