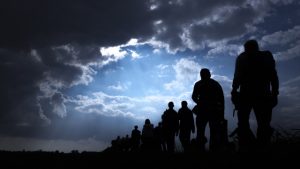 According to Rep. Michael Cloud, the crisis at the southern border, which the United States shares with Mexico, is getting worse and worse because cartels who are using this opportunity to make a booming business from trafficking folks into the United States, know that the Biden administration “doesn’t have the will” to stop what’s happening, and may not even want to stop it in the first place.

“The Biden administration wants open borders, but they know the American people do not want [them] and they won’t buy into it,” the Texas Republican went on to say during an appearance on Newsmax’s “Wake Up America.” “The idea is to completely overwhelm our border apparatus.”

His comments come as the administration is taking steps to restart the Trump-era “stay in Mexico” plan. Under that plan, asylum seekers are to wait in Mexico for U.S. court hearings. President Joe Biden stopped the program, but a federal court said the termination was not justified.

Morale is already extremely low among Border Patrol agents because they are overwhelmed, said Cloud.

Meanwhile, a mandate is coming up that border agents be vaccinated against COVID-19, and Cloud blamed that on the “lawlessness” of the Biden administration and said it goes against constitutional liberties allowing Americans to make their own medical decisions.

In addition, he said that Homeland Security Secretary Alejandro Mayorkas, as well as the administration, is “doing nothing” to secure the border, but the Biden “authoritarian regime” is putting mandates on Americans, and that is concerning.

The congressman then slammed Vice President Kamala Harris, who President Biden put in charge of finding out the root cause of this crisis, stating she’s done nothing but conduct a publicity stunt with the one visit she made to Texas.

“This last time, we saw tens of thousands of people at the border because it was out in the open,” Cloud went on to say. He was referring to when Haitians migrants showed up in Del Rio, Texas, attempting to cross into the United States. However, there are now reports that a caravan of 60,000 more folks is heading this way.

“The American people saw it, and so we saw a no-fly order because we didn’t want drone footage of it,” Cloud said in conclusion. “Then we played the shell game where we started putting people out where they couldn’t see it. My last trip to the border I was talking to one of the bus drivers there and he said, you should have seen this place a couple months ago or a couple weeks ago, because the last couple weeks they knew you were coming. They knew you all were coming.”