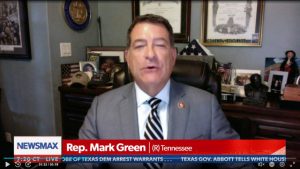 Rep. Mark Green, a Republican from the state of Tennessee, went off on the $1.2 trillion infrastructure bill that recently passed in the Senate, saying it contains “ridiculous spending,” but in reality it’s just something to get the wheel turning in Congress of a major restructuring of American government spending more in the range of the $3.5 trillion reconciliation bill.

“This infrastructure bill is just a bait and switch,” Green went on to say Thursday on the “Stinchfield program. “I mean, the whole intention of this thing is to try to get people, you know, particularly nine or 10 Democrats in the House, pinned against the wall so that they’ll have to vote or act to support the next big freight train that’s coming down the tunnel, and that is the $3.5 trillion Green New Deal wish list for liberals.”

Green then went on to warn that the worst “spending spree” in our nation’s history is being written as we speak.

“The $1.2 trillion has plenty of ridiculous spending, don’t get me wrong, but what’s behind it is and what this is all about — the game that this is all about is that massive, greatest legislative spending spree in history that the Senate is currently writing right now,” the congressman said.

Even some Democrats are wary of the $3.5 trillion budget proposal put forward by self-proclaimed ”democratic socialist” Sen. Bernie Sanders, I-Vt., chairman of the Senate Budget Committee.

“There are Democrats — nine Democrats sent a letter to [Speaker Nancy] Pelosi from the House — saying, ‘this is crazy,’ specifically talking about the $3.5 trillion package and they want to try to push now,” Green then stated. “These are people from her own party trying to push the infrastructure bill that’s out there now, get it heard so that the $3.5 [trillion], they don’t have to vote on it.”

“They’re trying to protect their seat,” he continued, going on to add that “the American people need to speak up” against massive spending.”

Inflationary pressures are going to raise the cost of doing business in this country, ultimately exporting jobs, business and growth overseas, Green concluded.

“As that manufacturing cost inflates — you know, it costs more to make it in the U.S. — those jobs are going to go overseas,” he finished. “We’re not even going to have an economy. They’re going to push all the manufacturing overseas again.”