Rep. Louie Shreds Biden’s Call For Taxing The Rich, Says It Will End Up Hurting The Poor 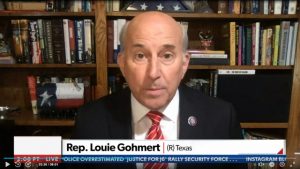 According to fiery conservative Congressman Louie Gohmert, a Texas Republican, calls being made by President Joe Biden to tax the wealthiest Americans in the country, along with the energy provisions he is including in the horrific $3.5 trillion spending bill, will end up doing severe damage to the country’s poor and will barely impact the rich at all.

“When you hear people say we’re going to tax the ultra-wealthy, the mega-wealthy, then the middle class and the poor of America need to grab their wallets because they’re coming after you,” Gohmert went on to tell the hosts of “The Count.”

Gohmert said he has spoken with economist Art Laffer about the tax plans, and the Reagan administration economist explained to him the ultrawealthy are the people who really cannot be taxed, as “they can afford to move.”

“They can afford to hire lawyers and accountants to change the way they receive income,” Gohmert stated. “They can get around whatever it is you’re taxing.”

Biden’s tax plan is “supposedly to fund this $3.5 trillion socialist agenda” plan, Gohmert said, “but you know that Biden was lying not just because his lips were moving, but because of what else is in there.”

“They’re going to raise energy costs dramatically, and they might as well call that the PPP, the penalty on poor people, because they’re the ones that get hammered,” Gohmert then said. “When you have stuff like in this bill about climate change, that is going to skyrocket the price of energy. That’s inconvenient to the very wealthy, but it is devastating to the middle class and those on a fixed income.”

He added there was another clue revealed this past week when the House Transportation and Infrastructure Committees got to deal with their part of the $3.5 trillion bill.

Also, raising taxes right now will cause a major increase in inflation, which would come about during a time when the middle class and the poor are already suffering economically.

“That will heat up inflation all the more and then you’re going to add more tax to these people when they’re at the breaking point,” Gohmert proclaimed. “This is a formula for disaster for people that are not wealthy.”

Gohmert then went on to provide details concerning a conversation he had with officials from Health and Human Services about the number of monoclonal antibodies that are currently being held back at a time when masses of folks are crossing into the country illegally, revealing that he was referred to “somebody from immigration.”

“This is a medical question,” the Texas representative said. “You’re going to ration how much of this life-saving medication that goes to the different states and you’re not even considering the number of the thousands of people you’re shipping to those states who are infected with COVID and spread it around. This administration, in every area, is doing great damage.”