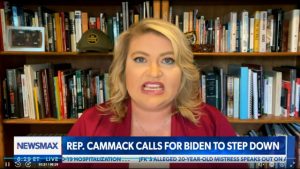 Rep. Kat Cammack, a Republican from the state of Florida, recently sat down for an interview in which she stated that she’s “absolutely, utterly disgusted” at the “total and utter incompetence of this administration.”

According to Cammack, she had to watch the Taliban execute a young translator who had been working with her office to try and get Americans and other allies out of the country of Afghanistan.

“They may say that the war is over, that the conflict is over — it isn’t until every single American gets home,” Cammack stated during the interview on Monday’s edition of “Spicer & Co.” “So until that president, that man in the White House who claims to be commander in chief decides to do something different, we will make sure that we are putting people above politics.”

Cammack had a few more sharp words for President Biden and both the State and Defense Departments, stating she was “furious, heartbroken, and pissed off” that the last flight to leave Afghanistan did so while some U.S. citizens were left behind enemy lines.

“He certainly has made it clear, abundantly clear, they’re about nothing, nothing, but a political outcome centered around [the] 9/11 anniversary of one of the most devastating attacks on American soil,” the congresswoman said to co-hosts Sean Spicer and Lyndsay Keith. “We will get our people home. And as you can probably tell, I’m pretty upset right now. I just I am absolutely utterly disgusted.”

Cammack claimed her staff and other members in Congress were working to get Americans and allies on planes, but were undermined by the Biden administration giving those names to the Taliban, which ultimately blocked their passage and led to the execution of the translator that was working with them.

“For the last 72 hours, I have had direct contact with the Department of Defense, with the Department of State, giving them [a] list of American citizens who had to make multiple trips to the gates because this administration gave the information for our American citizens and our allies to the Taliban — and they actively sought them out,” she continued. “So we kept having to change the safe houses and change the routes to get around the Taliban checkpoint.”

“And you know what happened last night after the third attempt of us trying to get four American citizens along with several green card holders and SIVs out? They killed our translator. And they video-recorded it,” she stated.

“I had to sit there and watch as a 20-year-old who had been helping Americans since he was 15 years old was beaten and executed by the Taliban,” said the congresswoman.

Cammack lamented that Biden’s withdrawal cost the lives of 13 U.S. service members in a suicide bombing last week at an airport gate in Kabul.

“We have Marines who have given their lives,” Cammack proclaimed. “We have families here at home who will never see their loved ones again because of the total and utter incompetence of this administration.”

The Florida congresswoman promised to bring that very message back to Congress in order to hold the current administration accountable for the loss of lives happening in Afghanistan.

“This will absolutely not stand,” Cammack went on to add. “We will be holding this administration accountable across the board.”

The first step of making this so is to get House Speaker Nancy Pelosi to call back Congress from summer vacation.

“How is it that Congress is on recess, that this administration has been on vacation?” Cammack stated. “No member of Congress should be on vacation while a single American is left behind.”

“That is why we have been screaming at the top of our lungs that Nancy Pelosi needs to reconvene Congress. We need to get back in session ASAP, because clearly there is no leadership happening at the highest levels, so we need to step in,” she noted.