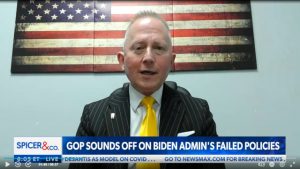 Rep. Jeff Van Drew, a Republican from New Jersey, who made the switch from the Democratic Party to the Republican Party back in 2020, said he wants to see Sen. Joe Manchin, a West Virginia Democrat, follow the same path and switch over to the “party of the future.”

Manchin, a centrist, has come under fire from other Democrats for announcing his opposition to the nearly $2 trillion Build Back Better Act in the evenly divided Senate, effectively killing the signature legislation for Democrats and President Joe Biden.

”I agree with what he did, and thank God he didn’t vote for that bill,” Van Drew said during the interview. ”He may become an independent. He may become a Republican, and I think he’s crazy if he stays [with the Democrats]. They’re just beating the daylights out of him. He’s trying to maintain some sense of normalcy in the party, but this isn’t the party we used to know.”

Van Drew, who left the Democrats himself after going to Congress as one in 2018 and voted in 2019 against impeaching then-President Donald Trump over his phone call with newly elected Ukrainian President Volodymyr Zelensky.

“When the Democrats tried to order me around, I was ready, willing and able to say, I’ve had enough with their radical socialist agenda,” he wrote in a USA Today article concerning his party switch in August 2020, going on to add that when he met with Trump, he “made me feel more comfortable and welcome in the Oval Office than [House Speaker] Nancy Pelosi ever made me feel in her caucus.”

Van Drew said Tuesday that the Democratic Party has gotten too extreme and no longer aligns with the views of most Americans.

The New Jersey senator stated that Manchin would probably receive some pushback for the switch, but noted he would likely be “happy” with it overall.

”You really have to think it through,” he stated. ”It’s not easy, because some people, you know, are going to be very angry. Not on the Republican side, though. It will be on the Democratic side, and they will say terrible things about him.”