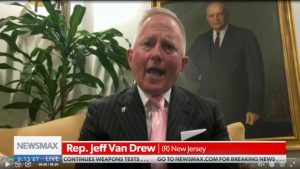 Rep. Jeff Van Drew, a Republican from New Jersey, is pulling no punches when it comes to delivering his honest assessment of the modern day Democratic Party, stating that it’s “destroying our country,” which is a statement the vast majority would heartily agree with.

“We are destroying the nation we know and love,” Van Drew, who actually used to be a Democrat but then switched parties just before the disaster that was the 2020 election, stated during an appearance on “Cortes & Pelligrino” Monday. “Immigration is a fine thing. Legal immigration, but they’re bringing in tens of thousands of people who have disease, who are involved with drugs, some of them have all types of issues, problems, and challenges that we just can’t afford to take care of in this country anymore, and I feel like standing up, and sometimes I do in Congress, on the floor, and saying ‘stop it! Stop destroying this America.’”

Van Drew said the administration of Joe Biden will go down as “the worst in history” because of the way he has handled things in the short eight months he has been in the Oval Office, especially the crisis at the southern border that has seen record numbers of illegal migrants surge across.

“It really doesn’t seem like the administration wants to focus on it,” he went on to state during the interview. “Obviously Camilla hasn’t been to the border and Joe Biden— We don’t think he’s ever been to the border. Obviously there’s no action being taken, and every time they get a chance they find a distraction. So, what’s it going to take?”

Van Drew said that he, and others in Congress, have obvious solutions, including building the wall that former President Donald Trump started work on to physically secure the border, until Biden took office and, by executive order, halted construction.

The New Jersey Republican then stated that he thinks the president is “ignoring the law” with the executive order actions he’s taken, and that he’s hurting the nation overall.

“He’s not changing the law, he is ignoring the law. He doesn’t believe in the rule of law,” he proclaimed. “This administration doesn’t believe in the rule of law, which is why I say it is the worst administration in the history of this great nation. It’s unbelievable what they’re doing. It’s disgusting. It’s hurtful, and it’s going to create a great deal of damage for our nation.”

Despite being a Democrat for quite awhile, Van Drew stated that the Democratic Party of today “left him,” and he has always maintained more of a conservative way of thinking.

“Keep in mind that I was what was a ‘blue dog Democrat,’ keep in mind (Former President) Ronald Reagan was a Democrat,” the congressman said. “The party didn’t, you know, just change overnight, but it changed pretty quickly, and the bottom line is that I didn’t leave the party, the party left me. I am proud to be a Republican. I’ve always been a conservative, and there just is no room for moderates or conservatives in this modern-day Democratic Party. They are destroying our country.”