Rep. Issa States That The Cover-Up Over Wuhan Lab Is A Concern Of Report 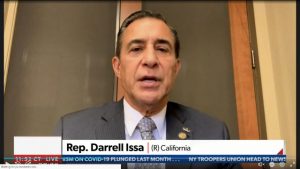 According to Rep. Darrell Issa, “all the facts” demonstrate there’s a high probability that the COVID-19 virus that has caused this worldwide pandemic we’ve all been living through, came about due to careless activity from the Wuhan Institute of Virology and that the findings in a new report could lead to new information showing how American officials “did a great deal of helping with the cover-up.”

“All facts tell us that there is a very high chance that this was in fact accidentally released through carelessness or some other activity from the Wuhan facility and covered up starting in September of 2019 by both Chinese and American officials,” Issa went on to say during his interview with Newsmax’s “John Bachman Now.” “That’s really where the facts lead, and it’s that last part that American officials did a great deal of helping with the cover-up that concerns us the most. ”

Rep. Mike McCaul, the top Republican on the House Foreign Affairs Committee, said Monday that the report, which he led from the panel’s Republican staff on the origins of the disease that the leak, was likely accidental but the cover-up of the incident and its aftermath are a concern.

“It took quite a while to get the DNA to figure out that in fact, this disease did not start with a bat that was indigenous to the region,” Issa went on to say concerning the early theories about the origin of the virus. “(This) was one of the first clues that it clearly was not from the (Wuhan) wet market, but we now have more and more evidence to show that it really did come from this lab. It came from activity that was unauthorized inappropriate based on international law, but may in fact have been supported even by Dr. (Anthony) Fauci.”

Issa also discussed the call from progressive Democrats like Rep. Alexandria Ocasio-Cortez to reject a bipartisan infrastructure bill without approving a much larger Democrat-led spending bill.

“Even by pork standards, they want things that are completely unrelated to the term infrastructure,” the congressman said. “They want to redefine infrastructure as anything you spend it on. They also completely don’t understand economics. The fact is this is a trillion dollars of borrowed money spending that will clearly add to inflation that is already heading toward double digits … this is no time to just haphazardly spend money to stimulate an economy that’s already doesn’t have enough labor and is seeing 5-6% inflation and more to come.”

Meanwhile, Issa on Monday was back in his district to present some 100 Vietnam War-era veterans with a new Congress-authorized pin recognizing their service.

“It was an unpopular war, but we treated the men and women who served during the 50s, 60s, and 70s poorly,” Issa commented. “This is our chance to thank them. Congress made this decision. DOD took a long time to design the pin. Now that we have it, we want to have everyone who served during the Vietnam era be able to receive the pin and wear it proudly and be thanked for their service.”

If this turns out to be true, then there needs to be action taken to ensure that all people involved in this cover-up face legal consequences. What kind of consequences? That’s something up for serious debate.

After all, this virus getting out cost a lot of people their lives and has led to our liberties coming under attack and a crashing economy. That’s major damage. Guess we’ll have to wait and see how it all shakes out.