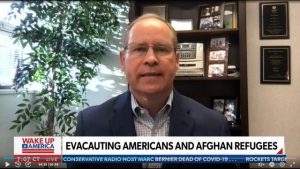 According to Rep. Greg Murphy, who is a member of the House Veterans Affairs Committee, the approaching Aug. 31 deadline for pulling out remaining Americans and our Afghan allies from Afghanistan is nothing more than “cowering’ to the Taliban and it isn’t likely the U.S. will be able to evacuate everyone before Wednesday.

“It’s an arbitrary deadline set by the Taliban, not by not by our government,” the North Carolina congressman stated during a chit-chat on Newsmax’s “Wake Up America.” “It’s just emblematic of the fact that we are cowering to a terrorist organization, rather than as the greatest nation on Earth dictating the terms of how we get our American citizens out.”

The United States has evacuated about 114,400 people, including foreign nationals and at-risk Afghans, and on Monday, one day before time was to run out for the evacuation effort, U.S. anti-missile defenses intercepted as many as five rockets that were fired at Kabul’s airport.

“There shouldn’t be a deadline,” Murphy proclaimed. “The deadline should be the last American citizen out of that country. An arbitrary date and time started because Joe Biden wanted to celebrate something on Sept. 11, going against his military advisers.”

It also went against common sense to close the Bagram Airfield, the largest strategic airbase the United States had in Afghanistan, said Murphy.

“I’ve never lived in a country where we leave Americans behind,” he continued. “It seems like that is inevitably going to happen tomorrow.”

What happens on Wednesday, one day after the deadline runs out, is “very difficult to answer,” said Murphy.

“We are leaving Americans in the hands of terrorists who knows if they will actually go by their word,” he added. “They are rather complicit with other Muslim terrorist groups; this is a tragic time in our nation’s history.”

Murphy also stated during the interview that he disagreed with White House Press Secretary Jen Psaki, who is quoted as saying that the United States has some kind of leverage over the Taliban, noting that the terrorist organization how has billions of dollars worth of U.S. military equipment they can sell off to fund their activities.