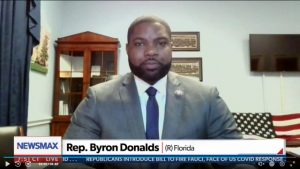 Rep. Byron Donalds recently made an appearance on Newsmax where he stated that Dr. Anthony Fauci has “lost his credibility” due to the fact he’s been “wrong more than he’s been right,” however the Biden administration won’t remove him from his post as director of the National Institutes of Allergy and Infectious Diseases.

“The American people see it,” the Florida Republican went on to say during an interview on Newsmax’s “Wake Up America.” “They don’t really want to hear from him anymore.”

He added that Fauci is a “bureaucrat” who has been able to stay in Washington, D.C. for three decades and he is willing to do whatever he needs to do in order to keep his current position.

Donalds’ comments come after Fauci and Sen. Rand Paul, R-Ky., engaged in another Senate committee showdown on Tuesday, with Paul implying Fauci had lied about the role the NIH played in funding research in Wuhan, China.

“You mean to tell me nobody else in our country is qualified to do the same job he has been doing?” Donalds went on to say. “I don’t think so. The reality is he’s a creature of Washington. He’s not going anywhere. This administration is not going to get rid of him because he’s going to sing the company line. It’s that simple.”

Donalds also slammed the Texas Democrats who left their state to block a quorum from voting on election reform, saying they believe the end justifies their means even if it means there are people in the nation’s capital catching COVID-19 from some of them.

“They would prefer that as opposed to actually doing their job in Texas andmaking sure we have sound voting laws,” Donalds continued. “If they stayed there, did their job, and even voted no, but Texas passed the bill anyway, people would actually see that what the Texas legislature is doing actually empowers more voters to go and vote and actually secures the process.”

But instead, the lawmakers had a “superspreader event on their private plane” and are now “moving COVID all over Washington D.C.” rather than returning to their own capital and going back to work,” said Donalds.

“This is a sad look at what’s happened frankly, to the Democrat Party in 2021,” said the Florida Republican. “They have gone off the deep end. If you had Republicans who even tried to do something like this, it would be wall-to-wall coverage on the major news networks about how we were derelict in our duty … it’s a massive double standard. It should never be tolerated.”

The congressman then stated that there are a lot of bills coming up soon that he doesn’t like, but “you don’t see me not coming to D.C. and doing my job.”

Fauci has really shot himself in the foot on numerous occasions with things he’s said that have turned out to be wrong. Guess we’ll have to wait and see how he comes out as the pandemic continues to die down.