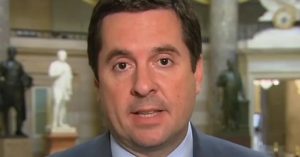 According to Rep. Devin Nunes from California, the testimony of Frances Haugen concerning the real dangers that Facebook and social media in general poses for children is a legitimate concern, but thinks it’s all a distraction to keep people away from the issue of the censorship of conservative voices.

“I’m a little bit suspicious of it,” Nunes, R-Calif., stated during a conversation Tuesday on “Eric Bolling The Balance.”

“The real problem” the congressman went on to say, is “they’re clearly using this to continue to censor conservatives, and I think what you’re going to see is that the Biden administration will use this to try to set up some type of government entity,” which, he added, are “always run by socialists, leftists who do more to harm to the United States.”

“[Former President Barack] Obama and [Facebook CEO Mark] Zuckerberg were the first ones to use the term fake news right after the 2016 election,” Nunes continued, “and from that point forward, they’ve been using this ability that they have with this kind of overarching messaging that oh, we want to just protect your kids.”

According to Nunes, the reason the message sits so well with folks is because we all want to protect our children.

Nunes suggested finding an alternative platform “because we can’t even communicate amongst ourselves as conservatives across the platforms because they censor so many people, they kicked so many people off the system.”

Trump himself has been banned from Twitter permanently, and is currently asking a judge to have him reinstated. His Facebook ban is not permanent, but will not come up for review for some time.

“Probably one of the most frightening days I’ve ever had as an American citizen and being on this planet was the day that [Jeff] Bezos and Amazon cut the wires, blew up the servers from the company named Parlor,” which is a more right-leaning alternative to Twitter that has become quite popular with conservatives, Nunes added. “Parlor’s back up and going, but it takes a while before they get up to the 15-20 million users that they had.”

However, the biggest concern for Nunes at the moment is that conservatives do not have communications architecture.

“We can’t even message to each other what’s actually happening in this country,” he stated.