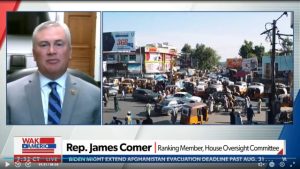 Rep. James Comer recently sat down for a chat with Newsmax, stating the House Oversight Committee wants the Biden administration to be fully transparent about the troop withdrawal from Afghanistan, which includes information about the billions of dollars worth of U.S. military equipment that is now being used by the Taliban.

Comer, a Republican from the Bluegrass State of Kentucky, said that the committee thus far was getting “very few answers.”

“It’s estimated by the Pentagon that the Taliban now has $85 billion worth of American military equipment,” Comer said during his interview on Newsmax’s “Wake Up America.” “We also know that the former president of Afghanistan fled with $169 million in cash. We want a full accounting of exactly what the U.S. military has lost to the Taliban. We want to know whose idea was to have that much equipment left behind and who thought that the [Afghan] military would actually fight back.”

House Speaker Nancy Pelosi, D-Calif., has called the House back into session, even though members usually are “never in session” during August. Comer said rather than “sitting around and doing nothing,” the Oversight Committee could be holding a hearing and getting the answers Americans want to know.

Committee members also want to know if the Pentagon has the ability to disable some of the items that were left behind so the Taliban fighters can’t use them.

Comer also discussed the upcoming vote on HR-4, the John Lewis Act, saying the Democrats have problems with “every effort to try to prevent fraud” in elections.

“I’m a member of Congress and I had to show my ID four times to go from the airport in Nashville to the capital yesterday,” Comer continued. “I never felt like I was being discriminated against.”

“If a state wants to require a voter ID that should be allowed,” he added. “We should respect states’ rights but the Democrats in Washington are trying to do everything in their ability to be able to manipulate these elections and make it easy to cheat.”