Rep. Cammack Says The United States Will ‘Absolutely Not’ Meet Deadline In Afghanistan 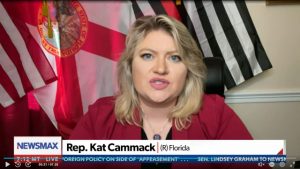 According to Rep. Kat Cammack spoke with Newsmax where she said that the United States will “absolutely not” finish getting all of the American citizens and other folks out of Afghanistan in time to meet the upcoming Aug. 31 deadline.

“I was in a briefing with my colleagues, a classified briefing, and in every single conversation, it was said by Republicans, by Democrats, by the leadership it’s just not feasible,” the Florida Republican stated during an interview Wednesday on Newsmax’s “National Report.” “There’s no way that we can make an Aug. 31 deadline when you look at everything that goes into [it], not just our American citizens with the SIVs [Special Immigrant Visas] and then all of the equipment, the critical equipment … as well as all of our military.”

The problem has been made worse by the Biden administration’s decision to give up Bagram Air Base in the weeks before the Taliban took control in Afghanistan, Cammack said.

“We have boxed ourselves into a situation where we’re using the Kabul airport, which really is effectively only one runway with no ramp, no ability to house multiple C-17s,” the congresswoman added.

Bagram, however, was heavily fortified, and its loss means there is “no relief valve” to be used to get people out, the congresswoman continued.

Cammack added that she asked Secretary of Defense Lloyd Austin why Bagram was given up, and he replied that it was transferred, not abandoned.

“They didn’t notify our NATO allies, they didn’t notify any of our partner countries … and they sure as hell didn’t notify the Afghanis, who were supposed to receive Bagram,” Cammack went on to explain. “There was no transfer. It was straight, pure abandonment of the one place that we could have effectively moved all of our equipment and all of our people out safely. And we gave it up because of poor planning, or lack thereof.”

Cammack also noted the news concerning the ISIS-K, which is some kind of offshoot of the well known terrorist organization, and the danger of attacks happening at the airport in Kabul as the evacuation efforts continue moving forward.

“We know that … could absolutely be something that we’re facing here in the next few days, over the course of a week. Imagine how that would impact our efforts to get our Americans home,” she said.

The handling of the U.S. troop withdrawal, overall, has been a “total, utter failure,” the Florida representative said. “I think this will go down in history as one of the worst examples of military planning.”

“She said that while attending the Naval War College, where she earned a master’s degree in national defense and strategic studies, she was presented with case studies of failures of leadership and lack of planning, and she thinks Biden’s handling of Afghanistan ‘will become a case study that future generations will look back on, and it will be talked about as the ultimate failure to plan effectively’ for the end of a war,” the report said.