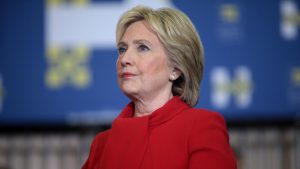 According to Rep. Tim Burchett, Hillary Clinton is a “dangerous” person and probably won’t “have to answer anything” concerning the allegations mentioned in the findings that were released by special counsel John Durham that her 2016 presidential campaign hired a tech company to infiltrate computer servers at Trump Tower and also at the White House after former President Donald Trump was inaugurated.

“This whole thing is just shady as Hades,” the Tennessee Republican stated during an interview on Newsmax’s “Wake Up America.” “You kind of have to have a scorecard to keep it all straight. It goes right back to Hillary Clinton.”

Clinton “has a history” of such actions being “perpetrated” on the American people, and Trump has been “completely correct when he said he had been spied upon,” the congressman added.

“The national media just laughed at him,” Burchett went on to say during the interview. “Leslie Stahl at ’60 Minutes’ — is that even a show anymore? — people won a Pulitzer for this garbage. That’s why nobody trusts the national media.”

Stahl has come under criticism over a 2020 interview with Trump, in which she dismissed his claims that he was spied on during the 2016 presidential campaign.

Burchett said those in the mainstream media aren’t covering the Durham findings because they “will have to admit their guilt in the whole thing.”

The congressman also talked about the tensions between Russia and Ukraine and said he doubts Russian President Vladimir Putin fears the U.S. response to the potential of an invasion, including the decision to put Vice President Kamala Harris in charge of the situation.

“She couldn’t pour something out of a boot if the instructions were written on the heel,” said Burchett in an epic burn. “She can’t even find our southern border, much less the Ukrainian border. This is a joke; this is a travesty … what Putin wants to do is restore the old USSR, and I’m afraid we’ve greenlighted him because of our bungling of what happened in Afghanistan.”