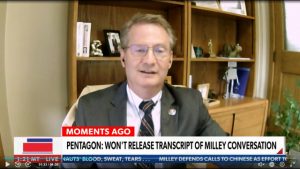 Rep. Tim Burchett recently went on Newsmax where he stated that he believes that Army Gen. Mark Milley, the current chairman of the Joint Chiefs of Staff, might be in violation of the Logan Act.

The Tennessee Republican had a conversation with the hosts of the “American Agenda” program where he said,”I believe he’s violated the Logan Act, which is a felony, and he could do some serious [prison] time. And if it’s true, also, he should be court-martialed, because he is definitely going around our president.”

”Maybe he and Pelosi and the rest are negotiating things they weren’t allowed to do, but what we’re going to have to do is get to a hearing,” Burchette added.

Burchett pointed out, however, that to get a hearing, representatives must go through House Speaker Nancy Pelosi, D-Calif. But garnering a hearing from Pelosi, whose beliefs regarding the situation differ from Burchett’s, would be a “tough pill for the Democrats to swallow.”

According to Congressional Research Service, the Logan Act is an 18th-century law that “makes it illegal for U.S. citizens to engage in unauthorized diplomacy with foreign countries with intent to ‘influence the measures or conduct’ of a foreign government or to ‘defeat the measures of the United States.'”

Milley reportedly told the Chinese general that he was concerned about former President Donald Trump’s mental state and that he might spark a war with China.

Milley then went on to try assuring Li during their first phone call that the relationship that exists between America and China is stable and that everything would be fine. During the second call, Milley is alleged to have told Li that “we are 100 percent steady. Everything’s fine. But democracy can be sloppy sometimes.”

On Wednesday, Pentagon Press Secretary John Kirby went on to say that it’s “not only common, it’s expected that a chairman of the Joint Chiefs of Staff would continue to have counterpart conversations,” adding that “frequent communication with countries like Russia and China is not atypical.”