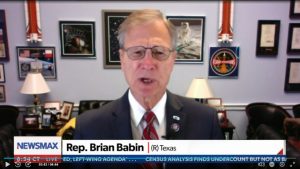 According to Rep. Brian Babin, the Biden administration has completely underestimated how much Americans are willing to fight in order to protect their rights and freedoms, and then stated “we may find out just how bad they’re going to pay the piper” with the outcome of Virginia’s gubernatorial race if Glenn Youngkin, the Republican candidate, pulls out a victory over Democrat Terry McAuliffe.

“The Democrats have misread this in a very serious manner with open borders, vaccine mandates, telling parents they are criminal domestic terrorists,” the Texas Republican went on to say during a conversation on Newsmax’s “Wake Up America.” “This is all going to play today, and I think it’s going to set up a precedent that I think we’re going to see over the next few months and year.”

Meanwhile, Babin and other colleagues have sent a letter to President Joe Biden concerning the impact of his vaccine mandate, and he told Newsmax Tuesday that the repercussions of the order will be felt hard at the nation’s border as up to 25% of the Border Patrol could be forced out of work for not having their shots.

He also called it hypocritical that the vaccine mandates are on Americans at a time when Biden has opened the border to hundreds of thousands of illegal immigrants but hasn’t required them to get their shots or even get tested for COVID-19.

“We’re going to wind up losing up to a quarter of our force with the Border Patrol,” Babin went on to state. “It’s just not smart. Let’s just put it like that.”

According to Babin, the vaccine mandates being proposed by Biden and other state administrations don’t seem to take natural immunity into consideration.

“I’m fully vaccinated but I still had a breakthrough case of COVID and I now have a natural immunity that’s probably going to last, according to the latest research, 12 to 14 months,” said the congressman. “They’re not taking into consideration that police officers and Border Patrol agents or folks that work for companies that have over 100 employees may have natural immunity. They don’t take that into consideration and they absolutely should … we cannot afford to lose any more police officers, Border Patrol agents, or some of our critical companies that have to do with national security.”