Rep. Boebert Strikes Back At Rep. Omar, Says She Showed Her True Character By Hanging Up On Her 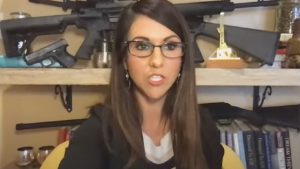 Rep. Lauren Boebert, a Republican from the state of Colorado, recently told the folks over at Newsmax on Thursday that Rep. Ilhan Omar revealed her true character to the whole world by hanging up on her and rejecting her attempt to make amends for some stinging comments made earlier in the week.

”I’ve moved on from this controversy. I made a public statement, I made a personal phone call to Ilhan to make things right, she hung up on me, really showing her character. She rejected my attempt to make amends and ended the call,” Boebert stated during a conversation on ”The Chris Salcedo Show.”

Boebert was referring to comments she made over the Thanksgiving break suggesting that Omar, one of three Muslims in Congress, represented a threat of terrorist violence.

”So, I’ve moved on. The 3rd District didn’t vote me into office because I’m perfect. They voted me in because I promised to fight for their freedoms and secure their rights, and that’s exactly what I’m focused on,” Boebert stated.

”I’m also focused on delivering results for my constituents back home and we have to get these American priorities back in order,” which includes energy production, the current border crisis, skyrocketing inflation and global supply issues.

”But the Democratic playbook is to get caught up in these distractions because they do not have policy to run on for the American people,” the Colorado congresswoman added.

Boebert also responded to Sen. Jeanne Shaheen, D-N.H., who on Monday warned of a ”revolution” if the Supreme Court overturns Roe v. Wade, which legalized abortion nationwide in 1973.

”If the Democrats did not have double standards, they would not have standards at all. I have been calling them out on their hypocrisy since I arrived in Washington, D.C., and that is exactly what I will continue to do,” Boebert remarked during the interview.