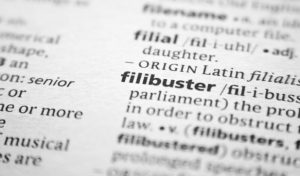 According to Rep. Bill Johnson, President Joe Biden isn’t likely to succeed in getting his wish to overturn the filibuster, which is party needed in order to push through voting legislation that is due to come up for a scheduled vote.

“I certainly hope that it fails,” the Ohio Republican stated during an appearance on “National Report,” on Monday. “Under the Constitution, state legislatures are the ones that have the sole authority to manage our federal elections. That’s the way our country has worked since its founding. That’s the way it should work now.”

Democrats themselves have made use of the filibuster more than 300 times when they were the minority party in the Senate, Johnson pointed out, so they know exactly how important it is.

Johnson also said that Americans are “taking note” and that the president is “focused on the wrong things,” which is why his poll numbers continue to tank.

Let’s hope Democrats definitely do not end up getting rid of the filibuster and shoving through this voting legislation which would spell the end of our constitutional republic.