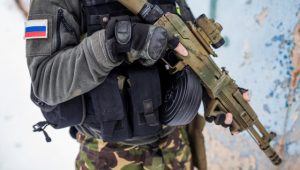 According to Rep. Don Bacon, who recently conducted an interview with Newsmax, all current indications seem to point toward Russian President Vladimir Putin deciding to invade Ukraine, which makes it difficult to understand the total disconnect between the warnings coming out of the White House and the statements made by Ukraine President Volodymyr Zelenskyy.

“Maybe he’s just trying to instill more confidence in his citizens, but it looks to me that with all of the intelligence that we have and the actions by Putin, it sure appears to me that [he] has decided,” the Nebraska Republican stated during his appearance on Newsmax’s “America Right Now.”

Russia has already moved field hospitals to the Ukraine border and is collecting blood donations, Bacon pointed out, so “therefore, troops will get injured. All the preparations you would expect to see for an invasion are being done.”

He added that he’s concerned that the United States is entering a new, ‘more dangerous” chapter on foreign affairs and national security.

“It’s a chapter where bullies and thugs are trying to dominate,” he continued during the interview. “It’s not just Russia. China’s watching this and Iran’s watching it. We’re going down a bad path in our world right now. And I think the intelligence is pretty clear that Russia is preparing to invade.”

It is hard to know whether the invasion would be full-scale or targeted to force Zelenskyy into a peace deal, but Putin’s actions are pointing to a large-scale attack, said Bacon.

“Putin wants Ukraine to be part of his country,” the congressman said. “They don’t see the Ukrainian people being independent. They’re like junior brothers, Slavic brothers, in Putin’s mind. He wants to go back to the Peter the Great era…I think most intelligence sources out there would say he’s planning a large invasion.”

“Meanwhile, Vice President Kamala Harris spoke in Munich on Saturday, where she said the United States is prepared to move forward with ‘swift, severe’ sanctions should an invasion be launched, but Bacon said the administration should have spent 90% of its time trying to deter’ an attack,” the report stated.

However, Bacon went on to reveal that he doesn’t believe Russia is actually taking the U.S. seriously about the threat of economic repercussions.

“I think they think they can outlast these economic sanctions,” commented Bacon. “I don’t think they take us too seriously based on the performance of Biden and his team this past year.”