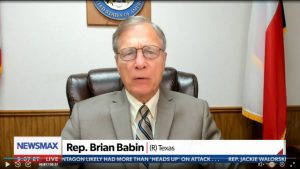 Rep. Brian Babin, who is the co-chairman of the Congressional Border Security Caucus, stated on Thursday that he hopes President Joe Biden’s return to the Trump era remain in Mexico policy will help to ease up the flow of illegal immigrants and thus solve the border crisis, but he has doubts it will.

“I’m not holding my breath,” the Texas Republican remarked during an interview on Newsmax’s “Wake Up America.” “We’ve seen the slow rolling and the pushback from this administration even on court orders on other issues as well.”

Under the Migrant Protection Protocols (MPP) enacted during the Trump administration, people entering or seeking admission into the United States illegally or without documentation were to be returned to Mexico where they would wait for the duration of their immigration proceedings.

President Joe Biden, upon entering office in January, canceled the program, but the administration said last week it will restart the protocols after a federal judge ruled the decision did not follow proper procedure and in August ordered the program to be reinstated.

Babin pointed out that the situation at the border has gotten much worse under Biden, with 1.6 million people crossing into the United States and being apprehended since January.

“At the same time, Biden is issuing travel bans that are absolutely meaningless,” Babin, making a reference to bans issued against southern African countries after the discovery of the omicron coronavirus variant was made.

“You know the illegals that are coming across, that does not do a thing to protect us from the COVID pandemic,” said the congressman. “And we have migrants from 106 countries who have crossed our border.”

But Babin did go on to say there’s a “strong possibility” that the current administration doesn’t really have any intention of actually securing the border.

“One of the biggest indicators of that is that we now know that removal deportations of illegal aliens in this country are down 80% from the time that President [Donald] Trump was in office,” said the Texas Republican. “That proves absolutely that the Biden administration has no intention of controlling this border.”

“They have empowered the terrorists, the drug traffickers, the human smugglers, and cartels, and they see our open borders and absolutely easy opportunity to come into America,” Babin commented. “He’s got to secure this border and stop the incentivization of illegal immigration.”

President Joe Biden handed the border crisis over to Vice President Kamala Harris and Babin said he hopes she does not become president, pointing out she’s failed to do anything to solve the problem.

“There are people dying on both sides of the border because of these border policies,” he said.

Babin then added that there’s been a whopping 341 percent increase in the amount of fentanyl that has come across the southern border over the course of the last year, noting that 100,000 Americans died of an overdose of the drug in 2021.

“It is unreal what this administration is doing to the American people,” Babin stated.