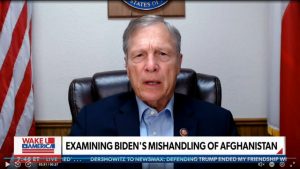 Congressman Brian Babin, after hearing former Secretary of State Mike Pompeo chat with members of the House Republican Conference, spoke with Newsmax and stated on Friday that he’s in total “100%” agreement with him that the chaotic situation unfolding in Afghanistan is something that was “totally preventable.”

“(President Joe) Biden absolutely did not listen to his advisers, didn’t pay attention to what was going on, and then turned and said the buck stops here and then says it was all Trump’s fault,” the Texas Republican went on to stated during his appearance on Newsmax’s “Wake Up America.”

Pompeo, who previously served on the House’s Benghazi select committee during his time as a representative for the state of Kansas, addressed the House GOP conference on Thursday morning.

During that call, Pompeo, widely seen as a potential presidential candidate for 2024, explained how the Trump administration would have handled the Afghanistan withdrawal and argued that the same chaos would not have happened, because under the previous president, the focus would have been on making removing Americans from the country a top priority.

Former President Donald Trump had based his agreement last year for the withdrawal of troops from Afghanistan on the condition that the actions of the Taliban would determine the progress of the withdrawal, Babin added.

“The number of troops was from 15,000 to 1,500 under President Trump,” Babin went on to say. “Why in the world could President Biden not do that? And why would he have given up Bagram Air Base?”

Babin said that all of that was before things unfolded in Afghanistan, as now the Taliban is “back in business.”

“They control more of Afghanistan than they did back in 2011 when we attacked them,” Babin explained. “It is amazing that we have a situation here that is so incompetently led.”

The congressman then went on to say that Democrats “know that there’s a real problem in the White House” with Biden occupying the Oval Office.

“The United States cannot continue to have flubs like this,” the Texas Republican stated. “Giving up billions of dollars of our equipment over there; seeing the Taliban run around with M-4s and M-16s. The Taliban has more Black Hawk helicopters than Australia, one of our allies.”