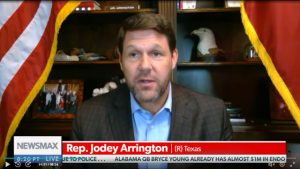 Rep. Jodey Arrington recently appeared on Newsmax where he stated that the $1.2 trillion infrastructure bill, coupled with the $3.5 trillion spending bill is “apparently causing trouble in progressive paradise this week,” after House Speaker Nancy Pelosi, along with other Democrats in the chamber decided to postpone a vote on the infrastructure measure for the second time in a week.

“[Pelosi] was supposed to vote on infrastructure Monday,” the Texas Republican said on Newsmax’s “National Report,” where he was interviewed along side Rep. Rob Estes from Kansas. “We’re at Friday and I don’t know that they will be able to get the votes.”

“Republicans have not been invited to negotiate,” said the congressman, pointing out that folks within the Republican Party have offered “hundreds of amendments” but every single one of them has been turned down.

“It’s a ram-and-jam job from the Democrats,” he said. “They can’t get agreement within their own caucus, and Pelosi is desperately trying to leverage the infrastructure bill, uh, to get the votes for the big $3.5 trillion monstrosity of a tax-and-spend bill and she’s not having much success.”

“They don’t want to run off the cliff that Nancy Pelosi is leading her caucus, recognizing that she’s not going to return and that more than likely we’re going to be in the majority. That’s my analysis,” Arrington went on to say.

Estes, meanwhile, pointed out that as Democrats control Congress and the White House, they should be able to reach an agreement but they are in an “interparty fight of trying to see how much money they can spend and trying to come up with different ideas.”

He added that the $3.5 trillion bill is being referred to as a reconciliation measure, but “that’s already moved up to $4.3 trillion, based on six of the House committees that voted to spend more money than what they were charged with when they started.”

Further, by trying to set up the bills as a package, that means the Democrats are trying to push through more than $5.5 trillion of spending on new programs that they want to roll out, Estes said.

“Their argument is between themselves about how much more money to spend and it’s going to continue to be a problem,” Estes went on to say. “It’s an issue that they’re focusing on, instead of focusing on what they should be doing, like keeping the government open. they just barely were able to get a continuing resolution to keep the government open until December and as of right now they have allowed the highway bill to expire, so we don’t have the authorization to do roads and bridges, which is a key part of the infrastructure that Americans really want.”

Sen. Joe Manchin, a Democrat from West Virginia, is causing quite a stir after calling for the spending measure’s top line to be cut down to $1.5 trillion. Sen. Krysten Sinema, a Democrat from Arizona, is not at all happy with the tax hikes that are necessary to provide funding for the bill’s provisions, completely opposing them.

Arrington then stated how much he appreciated these lawmakers and others like them for providing some hope that the destruction the measure could bring to America might be a little less severe.

“There are also progressive policies that will be stuffed in it, like forced unionization of every state,” the congressman commented, adding,  “We will still have all those Progressive policies and we’ll still tax American competitiveness overseas and put more burden on working families at a time when we’re trying to recover from the recession.”