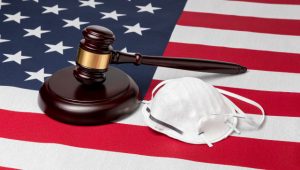 Rep. Andy Biggs, a member of the GOP from Arizona, made a claim last Friday on Newsmax that House Speaker Nancy Pelosi’s mask mandate, which is being enforced by fines, is symbolic of “neo-fascism.”

“They deny the science … This is all about control,” Biggs went on to say during an interview on Newsmax’s Greg Kelly Reports. “This has brought up what I called a neo-fascist authoritarianism to Congress and the White House. We’ve since seen power centralized in Washington, D.C. And they’ve used this epidemic to basically irrigate power to the center. And make us all less free. And the mask is a sign of that, and it’s part of the tyranny in the House of Representatives that Nancy Pelosi represents.”

The Centers for Disease Control and Prevention announced on May 13 that “fully vaccinated people can resume activities without wearing a mask or physically distancing, except where required by federal, state, local, tribal, or territorial laws, rules, and regulations, including local business and workplace guidance.”

Although federal mandates under the guidance of the CDC, such as attending a session in the House of Representatives, would require mask wearing, Biggs thinks his colleagues are overdoing it.

“I’ve seen people wear double masks when they’re 15 feet away from anybody else in the chamber. That’s fear and it’s symbolic of control,” Biggs told host Greg Kelly.

Individual members of Congress who come into a session without a mask on will get penalized $500 for their first offense. A second offense comes with a $2,500 fine.