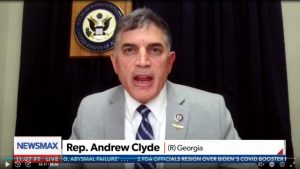 Rep. Andrew Clyde, a conservative Republican from Georgia, who has been pretty vocal about his support for a resolution that demands President Joe Biden, Secretary of Defense Lloyd Austin, and White House Joint Chiefs of Staff Mark Milley to resign after the chaos caused by the Afghanistan troop withdrawal, came out during a recent interview and said he knows there are “privately a lot of Democrats” who agree.

“This is just a terrible example of leadership and they all need to go,” Clyde said during an appearance he made on “American Agenda.” “I think privately there are a lot of Democrats, a number of Democrats, especially the veterans, that are speaking and saying ‘you know, Milley’s got to go, Austin’s got to go, [Secretary of State Antony] Blinken’s got to go.'”

The congressman then said that Democrats will not make the call for Biden to resign from office, even if the situation in Afghanistan reveals a “tremendous failure of leadership on all fronts.”

“President Biden yesterday in his news conference, he just lied to us, and that’s just unconscionable,” Clyde went on to add. “[He] is feeding a line to the American people that he wants them to think that he did a phenomenal job of getting us out of this war of ending this war. This war has not ended. We have simply transitioned to a new phase, a new phase where Afghanistan is now a safe space for the Taliban for the Haqqani Network, or al-Qaida and ISIS-K.”

Meanwhile, Biden is “trying to drive a narrative that is completely false,” Clyde said. “We’re calling him out on it, and that’s just the way it is.”

Clyde added the House Homeland Security Committee will make sure the Biden administration is held to account to properly vet the Afghan refugees that are coming into the United States.

“We’re already getting rumblings that there are people that have been brought into the country that are on the terrorism watch list, and that is inexcusable,” Clyde said. “This is something that we are going to make sure has a lot of focus because the administration right now, I don’t believe they can be trusted.”

Well, you know, we could borrow a page from the Democratic Party playbook and seek to impeach the president if he refuses to take responsibility for his actions in Afghanistan. It would be nice to give them a taste of their own medicine, wouldn’t it?

If Biden has even just a sliver of morality in his body, he needs to call it a day.