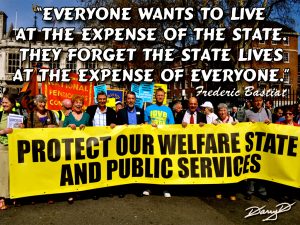 Since the War on Poverty began under President Lyndon Johnson in 1964, welfare spending has exploded to sixteen times its original size. In a new report from the Heritage Foundation, Robert Rector and Rachel Sheffield tackle the welfare system, explaining how spending has skyrocketed since the 1960s.

When you picture the ones benefiting most from welfare assistance, who do you envision? Probably a black teenage girl with a couple of illegitimate babies. If so, you would be wrong. The ones profiting most from the 53 year old War on Poverty are not black, but white. Most of them make six figure salaries, drive late model vehicles, and live in nice suburban homes in and around the Washington, DC area.

The welfare state has been really good news for people inside government. Lots and lots of bureaucrats are required to oversee a plethora of redistribution programs. Many successful political careers have been built on giving blacks, immigrants, etc. “favors” that look good on the surface but do lasting damage in the long run.

One of these “favors” was the welfare state. A vastly expanded welfare state in the 1960s destroyed the black family, which had survived centuries of slavery and generations of racial oppression.

Black economists, Professor Walter Williams, refers to those benefiting the most from the welfare programs as “poverty pimps.”

The celebrated economist and author, Professor Thomas Sowell, whose skin happens to be black, wrote these words in 1976: “To be blunt, the poor are a gold mine. By the time they are studied, advised, experimented with and administered, the poor have helped many a middle class liberal to achieve affluence with government money. The total amount of money the government spends on its ‘anti-poverty’ efforts is three times what would be required to lift every man, woman, and child in America above the poverty line by simply sending money to the poor.”

In more recent times, Sowell writes: “My fellow economist, Walter  Williams (another man whose skin happens to be black) has for years kept track of how much money it would take to lift every American man, woman and child in poverty above the official poverty level. That sum has consistently been some fraction of the money actually spent in “anti-poverty” programs. In other words, if you gave every poor person enough money to stop being poor, that would cost a fraction of what our welfare state programs and bureaucracies cost.

“Obviously, a lot of anti-poverty money is going to people who are not poor. There are whole classes of people who live off the poor — or rather, off the vast sums of money that are poured out from the public treasury and private philanthropy, in hopes of helping the poor.

“Those who intercept the money intended for the poor have been aptly called “poverty pimps.” The poor are a commodity to these people, who include not only local politicians, community activists and small-time hustlers, but also people with impressive titles and academic credentials, who likewise milk the larger society, in the name of the poor.

“At the top of the food chain, as it were, are Ivy League professors who rake in big-time research grants to support themselves and their cronies while they are studying, romanticizing or otherwise exploiting the poor.”

Democrats cooked up the great society, welfare, food stamps, and all other manner of government goodies because they said they wanted to “help” people. What was the result of that “help?” In the opinion of Professor Walter Williams, “The welfare state has done to black Americans what slavery couldn’t do. And that is to destroy the black family.

“In 1940, the illegitimacy rate among blacks was 19 percent, in 1960, 22 percent, and today, it’s now 70 percent. Some argue that the state of the black family is the result of the legacy of slavery, discrimination and poverty. That has to be nonsense. A study of 1880 family structure in Philadelphia shows that three-quarters of black families were nuclear families, comprised of two parents and children. In New York City in 1925, 85 percent of kin-related black households had two parents. In fact, according to Herbert Gutman in The Black Family in Slavery and Freedom: 1750-1925, “Five in six children under the age of 6 lived with both parents.” (“Having a black man in the Oval Office is less important than having one in the home” (Thomas Sowell).

One final note from Dr. Thomas Sowell: “Even when they have the potential to become productive members of society, the loss of welfare state benefits if they try to do so is an implicit “tax” on what they would earn that often exceeds the explicit tax on a millionaire. If increasing your income by $10,000 would cause you to lose $15,000 in government benefits, would you do it? In short, the political left’s welfare state makes poverty more comfortable, while penalizing attempts to rise out of poverty.”

He concludes with a powerful observation about who really benefits from the welfare state: “The left’s agenda is a disservice to [the poor], as well as to society. The agenda of the left — promoting envy and a sense of grievance, while making loud demands for “rights” to what other people have produced — is a pattern that has been widespread in countries around the world. This agenda has seldom lifted the poor out of poverty. But it has lifted the left to positions of power and self-aggrandizement, while they promote policies with socially counterproductive results.”