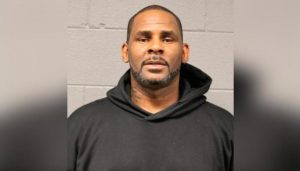 R. Kelly, legendary R&B singer, has been busted and indicted Thursday on charges of child pornography, enticement of a minor and obstruction of justice. He was charged with racketeering and sex-related crimes against women and girls.

This is a very disgusting, disturbed individual who needs to have the book thrown at him. He allegedly violated five girls between the ages of 12 and 17.

As Fox News noted, “The 18-page indictment unsealed Friday accuses Kelly and members of his entourage of recruiting women and girls to engage in illegal sexual activity with the singer … It describes rules that Kelly had for the women, including not allowing them to eat or use the bathroom and not permitting them to look at other men and telling them to keep their heads down.”

According to the charges, Kelly recorded himself having sex with five minor girls beginning in 1998. After learning that some of the tapes were missing from his “collection,” Kelly, McDavid and Brown embarked on a scheme to pay hundreds of thousands of dollars to recover the recordings from various individuals, the indictment alleges.

Kelly has been in trouble a lot over the years, including last February when he was charged with sexual abuse of four victims. He plead not guilty to the charges, paid bail, and was released.

He’s also been accused of holding women against their will in some sort of weirdo sex cult. That may or not be true, but would it be all that surprising given the man’s track record?

Here’s to hoping they nail him to the wall over this.