A Ray of Hope From the Rose Garden 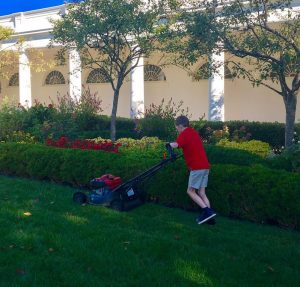 Just when it seemed all hope was lost, an eleven-year old boy cranked up a lawnmower in Washington, D.C. and sent a bright ray of hope across the entire country. Opponents of President Trump challenged his Make America Great Again campaign slogan by asking, “When was America ever great?” Frank “FX” Giaccio, the up-and-coming young entrepreneur, stood up last week and answered, “Right now.”

It would be my honor to mow the White House lawn this weekend for you. Even though I’m only ten, I would like to show the nation what young people like me are ready for. I admire your business background and have started my own business. I have been mowing my neighbors’ lawns for some time. Please see the attached flier. Here’s a list of what I have and you are free to pick whatever you want: power mower, push mower, and weed whacker. I can bring extra fuel for the power mower and charged batteries for the weed whacker. I will do this at no charge.

According to reports, the young man had also sent the same offer to former President Barrack Obama, whose staff answered for him with a form letter. Frank, however, has grit as well as a great work ethic. His original plan, according to his father, was to charge President Trump his standard fee of $8.00. After a discussion about the power of word-of-mouth advertising, however, he decided to offer his services for free. In addition to accepting the generous offer, President Trump sent birthday wishes to Frank, since he had celebrated another year since sending the letter.

Last week, Frank reported to the White House groundskeeping staff, then headed off to help one of the team in the Rose Garden. Once there, he made sure to wear all the right safety equipment – gloves, safety glasses, and earplugs. He also put on his game face before attacking the grass with a vengeance.

When President Trump came out to speak, Frank was so intent on his work that he didn’t notice until they were walking side-by-side. Work stopped just long enough for a high-five before Frank went back to his task. Standing to the side, the President said, “That’s the real future of our country right there. We’re lucky. Maybe he’ll be President someday.”

Frank and his father, Greg, who works for the U.S. Office of Special Counsel, met the President in the Oval Office after the Rose Garden had been landscaped to perfection. Frank also got to take the podium in the White House briefing room, though he declined to make any comments. In an interview on FBN’s “Mornings with Maria”, however, he said, “So far it’s pretty much the best day of my life.”

A young man with a work ethic and tons of grit decides to let the country know that things are going to be okay; we’re in good hands. He sends a (well-composed and grammatically correct!) letter to the President of the United States – twice – to make his point. Then, he shows up and does the work instead of getting caught up in the excitement of being at the White House with the President.

Seems like a great story that all Americans can enjoy, doesn’t it? Nope. Not at all. Twitter exploded after Sarah Huckabee Sanders’s post showing Frank behind a White House lawnmower and praising his efforts. Critics of the President accused him of exploiting a child for both labor and a photo-op. Some said he must be using Frank to distract us from some secret, nefarious deeds that will be unleashed over the next few days. Still others showed their ignorance by claiming the whole thing was nothing more than a commercial for Honda, maker of the lawnmower Frank used.

It’s hard to imagine anyone not praising a young person for showing the same discipline, mental toughness, and determination that made our nation great. Maybe the hatred some Americans feel for Donald Trump is so strong that they can’t see the inanity of dumping it on an eleven-year old boy. That says a lot more about those people than it does about President Trump.

Perhaps, though, it’s those most admirable traits themselves that are the problem for those folks. America has proven over and over what a nation can do when they serve as its foundation. If, despite the best efforts of those opposed to every conservative cause, these principles take root in future generations, America will become greater than she has ever been. That must be a terrifying thought for those who say she never was.