Ravens Sit Or Kneel During ‘Star-Spangled Banner,’ But Stand For ‘Black National Anthem’ 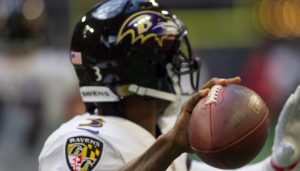 The Baltimore Ravens had their NFL season opener this past Sunday against the Cleveland Browns, and rather than taking an opportunity to show respect for the country that has provided them with the opportunity to become millionaires while playing a kid’s game and uniting people of all walks of life under the banner of Ravens fandom, they chose to go political.

All but two of their players stood up for the song “Lift Every Voice and Sing,” which is now being called the “black national anthem.” More than half of the team decided to sit or take a knee during the actual National Anthem.

“The Black national anthem, ‘Lift Every Voice and Sing,’ is currently being played,” reported Daniel Oyefusi on Sunday. “Ravens players are lined up at the goal line, while the Browns returned to their locker room. It looks like one Raven is kneeling.”

Oyefusi later amended, noting that he believes two Ravens players were kneeling during the song: Marlon Humphrey and Matthew Judon.

The Black national anthem, “Lift Every Voice and Sing,” is currently being played. Ravens players are lined up at the goal line, while the Browns returned to their locker room. It looks like one Raven is kneeling. pic.twitter.com/DfGlVdXpFq

Looks like Marlon Humphrey and Matthew Judon were kneeling.

When the “Star-Spangled Banner” played, however, more than half the roster sat or took a knee.

Well, folks, politics has officially ruined everything. There is nothing safe from the grasp of progressives who desire to keep everyone divided by political causes, refusing to allow anyone to actually enjoy any form of entertainment that might actually unite us together.

Sports was a great way to bring people into agreement with each other. We might be from different political backgrounds, but by golly, when our favorite team hits the field, we can put that junk aside and remember that we’re both human beings who enjoy something together.

Thanks, Democrats, for destroying that.