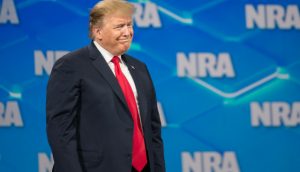 A brand new survey conducted by Rasmussen Reports says that if former President Donald Trump were to take on President Joe Biden in 2024, he would destroy the guy by 10 points, 51 percent to 41 percent.

Independent voters also overwhelmingly threw their support behind Trump, by 20 points, over Biden.

Trump 2024 Would Beat Either Biden or Harris

One-in-five Democrats say they would vote for Trump over either Biden or Harris … pic.twitter.com/GAIotGYAsw

Shockingly, nearly one-fifth of Democrats would also pull the lever for Donald Trump over Joe Biden, which should go along way toward revealing just how much of a failure this country thinks this current administration really is.

The survey is the latest of dozens that have shown Biden sinking like a stone. Many have turned south since the disastrous withdrawal of U.S. forces and diplomats from Afghanistan and the surge of illegal immigrants over the U.S.-Mexico border.

Others have shown that people are growing worried about Biden’s competence and ability to stay in office long enough to run for reelection.

At the same time, voters have been slow to warm to another Trump bid. But that appears to be over.

Rasmussen found that more likely voters than not want Trump to run again. By a 48%-44% margin, they told the pollster that running in 2024 is a good idea.

Former President Donald Trump, who is set to put on a rally this weekend in Georgia, has been hinting around at the possibility of a run in 2024, while many of his top advisers are essentially suggesting its definitely going to happen.

Interestingly, when voters were asked how they felt about the former president’s “aggressive, controversial” style, many of them stated it “wasn’t so bad,” by a margin of 52 percent to 44 percent.