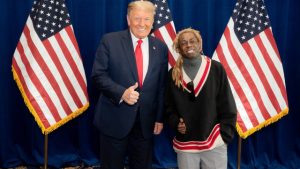 Lots of support for President Trump seems to be coming from a very unusual source these days, an unlikely place you’d probably assume wouldn’t be big fans of the commander-in-chief.

The rap community. Yes, that’s right. There have been several popular rap artists who have come out and stated they are voting for Trump in the upcoming election, while others have said they are working with him on the “Platinum Plan,” which is designed to help invest in the black community.

The latest rap artist to do this is Lil Wayne.

“Just had a great meeting with [President Donald Trump],” Wayne, whose real name is Dwayne Michael Carter Jr., captioned a photo of the pair together.

“Besides what he’s done so far with criminal reform,” he added, “the platinum plan is going to give the community real ownership. He listened to what we had to say today and assured he will and can get it done.”

Just had a great meeting with @realdonaldtrump @potus besides what he’s done so far with criminal reform, the platinum plan is going to give the community real ownership. He listened to what we had to say today and assured he will and can get it done. 🤙🏾 pic.twitter.com/Q9c5k1yMWf

Wayne has made political headlines before for backing police officers and his criticism of far-Left activism, which he categorized as mostly empty “hashtag” or “t-shirt” activism.

Back during the start of the whole George Floyd situation, Wayne told people to be “very specific” when reacting to what they considered injustices, issuing a warning not to blame the “entire force” or an “entire race” for the actions of a few individuals.

He also admonished protesters to actually learn what they are protesting about before they stand up and advocate for a particular cause.

“It’s a bunch of facts that we think we know that we don’t know,” Lil Wayne said.

“We have to get into who that person is,” the rapper went on. “If we want to place the blame on anybody, it should be ourselves for not doing more than what we think we’re doing.”

These are some of the wisest words concerning the state of modern race relations and the protest movement sweeping the country. Lil Wayne seems to get it. Let’s hope his influence spreads and others pick up the trail.