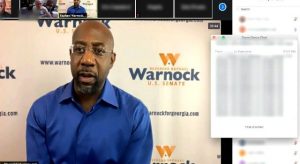 A video has surfaced this week featuring Georgia Democratic Senate candidate Raphael Warnock making the claim in a sermon from April 2011 that no American could serve their country in “the military” while also serving God.

Warnock’s unearthed controversial remarks come as he is running for U.S. Senate in a state that has 14 military installations and where nearly 80% of the state’s residents identify themselves as Christian.

Sen. Marco Rubio (R-FL) posted the video on Twitter, writing that he was “not shocked” by Warnock’s extreme comments.

Rubio added, “These and even crazier things is what the radicals who control the Democratic party’s activist and small dollar donor base believe.”

“Video of the remarks surfaced as Warnock is facing criticism for other controversial statements, including his claim that ‘America needs to repent for its worship of whiteness,’” The Washington Free Beacon wrote in a recent report. “He has also come under scrutiny for his support for his religious mentor James Hal Cone, who said that white Christians practice the ‘theology of the Antichrist’ and described white people as ‘satanic.’”

Not shocked #Georgia Democrat Senate candidate Raphael Warnock said “You cannot serve God and the military” at the same time. These & even crazier things is what the radicals who control the Democratic party’s activist & small dollar donor base believehttps://t.co/bQyBuKLwjb

Warnock’s campaign released a statement attempting to clarify the statement by saying that in the sermon he was referring to serving two masters.

“This sermon is based on a biblical verse that reads ‘No man can serve two masters… Ye cannot serve God and mammon,’ a biblical term for wealth,” Terrence Clark, communications director for the Warnock campaign, said during an appearance on Fox News. “Reverend Warnock was speaking about the need to commit to moral life before pursuing other priorities. As the video of the congregation’s response makes clear, this is another blatant effort by Kelly Loeffler to take Reverend Warnock’s words completely out of context. Given her own decision to spend her first days in the U.S. Senate profiting off the pandemic, perhaps she should watch the sermon more closely.”

By the way, those verses have nothing to do with serving in the military. In fact, if you take a look at Luke 3:14, the Bible tells soldiers to “be content with your pay,” which kind of seems to say the opposite of not being able to serve.

Folks, if you live in Georgia and are trying to make up your mind who should be your senator in the runoff, these statements should make your decision a very, very easy one.