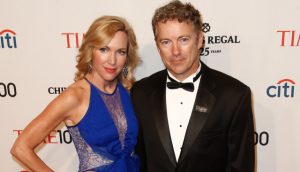 Over the weekend, Kelley Ashby Paul, wife of Sen. Rand Paul of Kentucky, went totally nuclear on Twitter CEO Jack Dorsey, saying, “Hey @jack, remember how for the last three years you have allowed thousands of hateful tweets celebrating my husband’s assault and encouraging more violence against him? I do.”

Hey @jack , remember how for the last three years you have allowed thousands of hateful tweets celebrating my husband’s assault and encouraging more violence against him? I do.

This isn’t the first time that Dorsey and his goons over at Twitter have allowed tweets that promote violence against conservatives, particularly Rand Paul.

At the end of December, a man who was named “National Teacher of the Year” in 2019 by the Council of Chief State School Officers tweeted that the neighbors of Senate Majority Leader Mitch McConnell should act like a “true Kentucky hero” the way that the neighbor of Senator Rand Paul (R-KY) violently attacked Paul in 2017, leaving him with six broken ribs and necessitating the removal of part of his lung.

Rodney Robinson tweeted, “Who are Mitch McConnell’s neighbors? I’m just saying Rand Paul’s neighbor did what a true Kentucky hero should do. It’s your turn to step up.”

2019 National Teacher of the Year pic.twitter.com/0PQTDxos3v

In response, Kelley Paul wrote, “I am so disgusted by this I have no words. The 2019 ‘National teacher of the Year’ is celebrating the violent assault on my husband that resulted in 6 broken ribs and part of his lung being removed. This hateful thug is calling for more violence on Sen McConnell.”

Back in March of 2020, Christine Pelosi, the spawn of Democrat House Speaker Nancy Pelosi, praised the assault on Paul as well, right after he announced that he had contracted the coronavirus. The younger Pelosi tweeted, “Rand Paul’s neighbor was right.”

Then, Rep. Ilhan Omar, in July of 2019, retweeted actor Tom Arnold who posted, “Imagine being Rand Paul’s next door neighbor and having to deal with [Rand Paul] lying cowardly circular whiney bullcrap about lawn clippings. No wonder he ripped his toupee off.”

So much for all of that tolerance talk the left is always going on about, right? It seems you are only allowed to receive tolerance from liberals when you already believe their ideology.

Folks, radical leftists are a violent bunch of people. That much we should all agree on. And yet, it’s conservatives being kicked off these platforms. Doesn’t make a bit of sense.