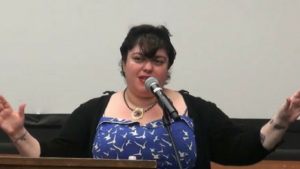 Do y’all remember that time that feminist professor from Fresno State actually celebrated the passing of former First Lady Barbara Bush on Twitter?

And how she doubled-down once confronted, unleashing several more profanity-laced tirades against the deceased?

And just as nutso as ever!

Randa Jarrar, who managed to hold down her job at Fresno State University, while clearly a staunch defender of her own freedom of speech back in April, took to Twitter once again to advocate for removing white people from editorial boards.

“At some point, all of us in the literary community must DEMAND that white editors resign. It’s time to STEP DOWN and hand over the positions of power,” Jarrar tweeted, according to Campus Reform, who obtained a screenshot of her tweet despite her account being made private following her Bush rants. “We don’t have to wait for them to f*** up. The fact that they hold these positions is f*** up enough.”

She was angry over a poem recently published over at Nation, which many felt was insensitive to minorities, although it was published with ample trigger warnings. Apparently, those things don’t’ protect against faux outrage and certainly not against racist, dramatic rants on Twitter.

The poem, “How-To” by Anders Carlson-Wee, includes the lines “Don’t say homeless, they know / you is” and “If you’re crippled don’t / flaunt it. Let em think they’re good enough / Christians to notice.”

Jarrar has called for the specific resignation of Stephanie Burt, a poetry editor for The Nation, tweeting that Burt “erases and violently silences [people of color].”

“Stephanie has said some hurtful sh*t about George W Bush and has hurt Arab American poets in my community,” Jarrar claims. “I ask that she resign.”

The editor in question didn’t resign, but rather issued a lengthy apology, because of course she did, to which Jarrar replied: “Resign.”

To be fair, leftists don’t have much to offer when they’re outraged other than to demand someone resign for failing to live up to their impeccable standards of political correctness, so what else was Jarrar going to say?

It is ironic, of course, because after tweeting “Barbara Bush was a generous and smart and amazing racist who, along with her husband, raised a war criminal. F*** outta here with your nice words,” in April, she also bragged she would “never be fired” because she was a tenured professor.

So as long as you’re bashing white people, you can say whatever you want. Everyone else needs to lose their job.