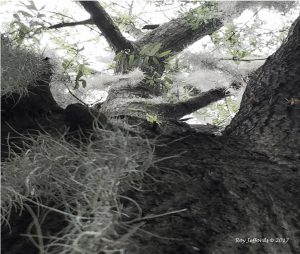 Mississippi is a place made for haints. The hanging moss, thick vegetation, and primeval swamps could be straight from the mind of Stephen King, Wes Craven, or Dean Koontz. Just a few weeks ago, a group of students from the University of Mississippi found themselves in a situation so scary, they apparently thought they were characters in one of those horror master’s novels.

According to reports from the school’s Interim Director of Fraternity and Sorority Life, Alex Lee Arndt, Greek leaders were on a retreat when the President of Alpha Kappa Alpha, a historically black sorority on the Ole Miss campus, spotted a banana peel up in a tree. If the poor girl really had been the main character in a horror novel or movie, she undoubtedly would have found a ladder and investigated further while the audience sat on the edge of their seats, waiting for imminent doom to fall.

As terrifying as the beginning was, however, the story goes downhill from here. The poor girl did what every horror flick victim should have done right at the start – she got frightened and ran away. Within hours, the entire group was so spooked and felt, using their word, so unsafe that the event was cancelled and students were taken back to the secure confines of their campus. In an email to the entire group of Greek leadership, Arndt said,

To be clear, many members of our community were hurt, frightened, and upset by what occurred at [the retreat]. Because of the underlying reality many students of color endure on a daily basis, the conversation manifested into a larger conversation about race relations today at the University of Mississippi.”

No one can deny that banana peels are scary things when they’re on the ground. Those yellow slipsters seem to have a knack – for the Three Stooges and Looney Tunes characters, anyway – of getting in just the right position to send the unsuspecting pedestrian flying ass-end-over-tea-kettle. A banana peel hanging up over a tree branch, though? Things must be pretty bad down there in Oxford, Mississippi. Such an extreme reaction to something so innocuous makes it easy to wonder if what’s seen as violence in Charlottesville, Virginia is just another day at school in Oxford, Mississippi.

The incident took an almost comic turn a couple of days later when the student responsible for the whole brouhaha came forward with his confession. He had eaten a banana while walking through the camp, he said, and couldn’t find a trashcan to put the peel in. So, rather than toss it on the ground to upend some oblivious stranger, he tossed it up into a tree. In an open letter to the entire Ole Miss campus, he said,

The fact that the student felt he had to go through such self-flagellation – not because he improperly disposed of bio-degradable trash, but because other students were too far inside their own heads to understand that they aren’t central to every single thing that happens around them – makes what had the potential to be humorous nothing but sad. The school’s reaction takes the situation from sad to inane. Instead of telling the Greek leaders (leaders, mind you) to get over themselves, the administration plans to “…[create] a plan to formally handle the incident.” In addition, they will facilitate conversations aimed at helping students come to grips with the banana peel incident.

Some people are outraged by the racism they see in a bit of trash tossed up into a tree. Others are outraged at the reaction of the ones who first expressed their outrage. Overblown, emotional reactions are what caused the problem; they are not what is needed to fix it. Before puffing up in righteous indignation, it’s important to know why this story is significant.

These students, who are leaders on a major university’s campus, were traumatized by a banana peel. Traumatized. By. A. Banana. Peel. I know kindergarten students who have better problem solving and analytical thinking skills than these chuckleheaded college students! And these are the people who hold our immediate future.

They are going to be doctors, lawyers, CEO’s, scientists, Congressmen, and Senators. They will see the very worst humanity has to offer. They will be called to stand and defend their families and their countrymen. The fate of humanity will one day depend on their ability to assess, defuse, or otherwise deal with bad situations. But, they couldn’t, as a group or individuals, handle a banana peel stuck up in a tree.

Getting old just got a whole lot scarier.