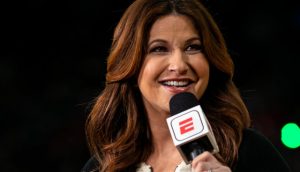 Well, we knew it was only going to be a matter of time before the “woke” elites over at ESPN decided to give reporter Rachel Nichols the boot, and it looks like that day has finally come.

Nichols was caught several months back on a hot-mic saying the reason she lost a job to former ESPN colleague Maria Taylor was “diversity.” The reporter has been booted from the network’s NBA coverage and her show, “The Jump,” has been yanked off the air.

Nichols has hosted the program for the last five years.

“We mutually agreed that this approach regarding our NBA coverage was best for all concerned,” ESPN Senior VP/Production David Roberts went on to say in a statement emailed to SBJ. “Rachel is an excellent reporter, host and journalist, and we thank her for her many contributions to our NBA content.”

Nichols confirmed the move on her social media accounts.

“Got to create a whole show and spend five years hanging out with some of my favorite people … talking about one [sic] my favorite things … An eternal thank you to our amazing producers & crew – The Jump was never built to last forever but it sure was fun … More to come… “ she tweeted.

Got to create a whole show and spend five years hanging out with some of my favorite people ❤️ talking about one my favorite things 🏀 An eternal thank you to our amazing producers & crew – The Jump was never built to last forever but it sure was fun. 😎
More to come… pic.twitter.com/FPMFRlfJin

Nichols found herself in hot water after a conversation between herself and longtime LeBron James advisor Adam Mendelsohn was inadvertently recorded and leaked. The conversation took place in Nichols’ hotel room in Orlando, Florida, while in the NBA bubble, where the 2020 NBA Playoffs were taking place. Nichols had recently been informed by management that she would not be hosting ESPN’s pregame and postgame shows for the NBA Finals. Taylor — who is black — would be given the assignment.

“I wish Maria Taylor all the success in the world — she covers football, she covers basketball,” the sports reporter stated on July 13, 2020. “If you need to give her more things to do because you are feeling pressure about your crappy longtime record on diversity — which, by the way, I know personally from the female side of it — like, go for it. Just find it somewhere else. You are not going to find it from me or taking my thing away.”

In July, The New York Times published an article detailing the fallout from the leaked audio which had reportedly angered many employees — including Taylor — at the four-letter network.

After the recording became public, Nichols issued an apology on her now cancelled show.

“The first thing they teach you in journalism school is, ‘Don’t be the story.’ And I don’t plan to break that rule today or distract from a fantastic Finals,” Nichols said in her apology. “But I also don’t want to let this moment pass without saying how much I respect, how much I value our colleagues here at ESPN. How deeply, deeply sorry I am for disappointing those I hurt, particularly Maria Taylor. And how grateful I am to be a part of this outstanding team.”

But, as we all know, an apology is never enough for the woke mob, so Nichols was given her pink slip and removed from her sideline duties for the 2021 NBA Finals and one of the episodes of her show was cancelled.

Nichols is still technically under contract with ESPN, with more than a year left to go, but it isn’t likely we’ll see her on the network during that time.