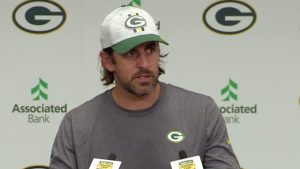 Aaron Rodgers, star quarterback for the Green Bay Packers, has a message for the folks who think science shouldn’t be questioned, stating that such a belief is nothing more than propaganda.

“If science can’t be questioned, it’s not science anymore; it’s propaganda,” Rodgers told an excited Pat McAffee during an interview on his show.

“That’s the truth,” he stated. “When did science become this blind agreement [about] not having any debate over what can actually heal people and work for people. That makes no sense to me.”

Rodgers’ comments come in light of his recent infection with COVID-19, during which he followed up with a series of treatments that did not include a vaccine. “I also got better in 48 hours,” from the treatments he added. “And I had symptoms.”

In a separate appearance on McAfee’s show, Rodgers questioned why there was no public discussion on the promotion of a healthy lifestyle to combat the virus.

“Throughout this entire time, there hasn’t been real conversations around health…As far as giving people, you know, things to think about when it comes to how to be healthier, right? As far as your diet, vitamins, exercise and those kinds of things,” Rodgers went on to say.

The very foundation of science is questioning everything you see and experience. It’s the only way to continue advancing, in finding facts that we can apply to important issues like medicine.

If scientists do not want their findings questioned, it means they are afraid what they have discovered isn’t true, and thus, they want you to believe what they are selling. Which, as Rodgers pointed out, is propaganda.