Do You Qualify for the Christopher Columbus Award? 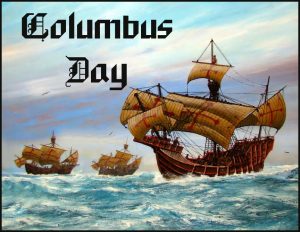 The second Monday in October in America is designated Columbus Day and has become one of our most controversial holidays. In April 1934, as a result of lobbying by the Knights of Columbus and New York City Italian leader Generoso Pope, Congress and President Franklin Delano Roosevelt proclaimed October 12 a federal holiday under the name Columbus Day. It wasn’t officially established as a federal holiday until 1937.

Currently, a number of cities across America have already swapped Columbus Day for Indigenous People’s Day. Detractors argue Genoese explorer Christopher Columbus brought along slavery, disease, and death when he colonized the Caribbean for Spain, and should therefore not be hailed as a hero.

Proponents of Columbus have labeled efforts to topple the holiday as a case of political correctness run amok, arguing that the man is an important part of Italian American heritage.

Either way, the fact it’s a debate at all is unusual, considering Columbus himself never even made it to North America — let alone the portion of the continent that would one day become the USA.

Christopher Columbus (1451-1506), was a map-making mariner from Genoa, now a city in Italy, whose mission was to reach the East Indies (India and China) — all east of Europe — by sailing his fleets West.

He successfully arrived in the “New World” (the Bahamas, Cuba, the Caribbean, and South and Central America) several times — but he still held to his stubborn belief that he really reached an island in the East Indies and was close to Japan and China!

Why such an obvious discrepancy?

He was calculating the mileage with the wrong formula, long before Google Earth or GPS.

Columbus got somewhere, but not where he thought.

Consequently, we conclude: Columbus was a famous explorer, not a famous navigator.

There is a fictitious award in his honor now, for all people who can’t find their way:

This citation should be given to a great number of those who want to lead us today. They are forever going, but never arriving; in perpetual motion, but making no progress.

Democrat Nancy Pelosi, the first female Speaker of the House, should have been given the Christopher Columbus Award when she said concerning the Affordable Care Act: “We have to pass the bill so that you can find out what is in it.”

Then there was Sheryl Crow on Environmentalism: “I propose a limitation be put on how many squares [sic] of toilet paper can be used in any one sitting. Now, I don’t want to rob any law-abiding American of his or her God-given rights, but I think we are an industrious enough people that we can make it work with only one square per restroom visit, except, of course, on those pesky occasions where 2 to 3 could be required.'”

Joy Behar on Economics: “Isn’t it a little racist to call it Black Friday?”

Vice President Joe Biden on culturalism: “In Delaware, the largest growth of population is Indian Americans, moving from India. You cannot go to a 7/11 or a Dunkin’ Donuts unless you have a slight Indian accent. I’m not joking.” Speaking about the economy, Biden said: “The number one job facing the middle class, and it happens to be, as Barack says, a three-letter word: jobs. J-O-B-S.”

California Senator Barbara Boxer: “Those who survived the San Francisco earthquake said, ‘Thank God, I’m still alive.’ But, of course, those who died, their lives will never be the same again.”

Then the all-time potential recipient of the Columbus Award should go to Yogi Berra for such statements as: “When you come to a fork in the road, take it.” “You can observe a lot by just watching.” “Always go to other people’s funerals, otherwise they won’t come to yours.” “You’ve got to be very careful if you don’t know where you are going, because you might not get there.”

The ultimate reality is that the Lord has a wonderful plan to prosper each of us and give us a future. However, knowing God has a plan and we have a future and final destiny doesn’t automatically get us there. Knowing where we are going involves some sort of guidance and this requires a reliable Guide. Without a reliable guide, we will be like the hunter who hired a guide in upstate Minnesota to lead him on a moose hunt. After a day of aimless wandering in which it became increasingly obvious to the hunter that they were lost, he said, “I thought you were the best guide in these parts of the USA!” “I am,” said the guide, “but I think we are in Canada.”

Our daily prayer should be that of Psalm 143:10, “Teach me to do Your will, For You are my God; Let Your good Spirit lead me on level ground.” And the words of the model prayer in Matthew 6:10, “Thy will be done on earth as it is in heaven.” We pray in this manner because according to Romans 12:2, the will of God is “good, acceptable, and perfect.”

There are only two options in life. One, to declare to God, “Not Your will but mine be done.” The other says, “Not my will but Yours be done.”

The national anthem of the former is, “Let the record show, I did it MY WAY!”

Caution: If you keep sailing through life doing it your way, I promise you will not like the final port of disembarkation!

Wade Trimmer has been in full-time Christian service since 1971, thirty-five of those years as a senior pastor.

In 2008, Pastor Wade formed Training for Reigning Institute of Disciple-making, a non-profit organization, for the purpose of equipping leaders, especially in Third World countries, in being more effective in carrying out the Great Commission (Visit our website: TRIDM.org). The past 9 years have taken Pastor Wade outside the USA to more than 25 different nations.