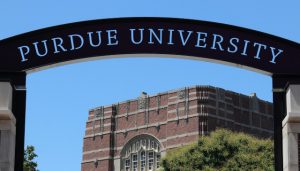 Purdue University has seemingly changed their minds about a policy that they had put in place that made it mandatory for members of a student choir group to take a series of “diversity, equity, and inclusion” training sessions that were grounded in critical race theory.

This is the kind of crap they are trying to stuff down into the brains of young people before they hit the real world so they can infect our surrounding culture with the insanity of cultural Marxism.

The Purdue Musical Organizations, which oversees “six choral ensembles and a handbell choir,” announced late last month it would require members to enroll in six antiracist training modules, according to emails reviewed by the Washington Free Beacon. The course curriculum includes modules on “White Privilege, White Supremacy, and White Fragility,” and “White Saviorism and How To Be A Better Ally,” as well as required readings from “antiracist” academics.

Initially set to begin in February, the three-week course was delayed until March in response to pushback from students. After a Free Beacon inquiry regarding the mandate, a university spokesman said it had decided the training would now be optional.

“Purdue Musical Organizations is committed to inclusive excellence and has created a program, alongside the Purdue Office of Diversity and Inclusion, to create a learning series focused on engaging all of its members, whatever their lived experiences may be,” spokesman Tim Doty said in an emailed statement. “The series will be offered beginning in March. Recognizing the stresses presented by COVID, as well as the existing commitments that many students have outside of [Purdue Musical Organizations], the series is not required, but participation is strongly encouraged.”

Less than an hour later, students in the Purdue Musical Organization received a similar email from organization directors, informing them that they would no longer be required to take the class.

One of the big concerns for students was that they would not be receiving credit hours for the class and feared they would interfere with their work schedules. Others wanted no part of it because of the courses being grounded in critical race theory, which says that all of the political and economic systems in the country are “inherently oppressive and racist.”

Logan Wheeler, a junior at the school, actually resigned from the group because of the course having connections to critical race theory. Wheeler stated that he supports diversity training, but thinks that critical race theory does a lot of damage to the work completed by civil rights leaders.

“When I look at critical race theory, the first person I look to for guidance is the greatest civil rights activist, Dr. Martin Luther King Jr., and the biggest thing he always pushed for was judging people on the contents of their character and not the color of their skin,” the junior said. “I believe that since then the United States has been working closer to that spot.”

Now that’s a smart kid. Maybe there is still hope for the future of this country after all.